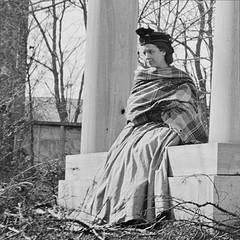 Susan Baker King Taylor didn’t live like most Negro women of the Civil War. Because of that fact, for years following the war the Grand Army of the Republic and the Women’s Relief Corps repeatedly urged her to write her memoirs. Her family and friends even supported the notion. But it wasn’t until a man whom she highly respected lent his support to the idea that Susan undertook the task of putting pen to paper. The man was Colonel Charles Tyler Trowbridge, a man who it is believed was the first person to enlist colored soldiers during the Civil War. Susan was born under Georgia Slave Law to parents Hagar Ann and Raymond Baker in Liberty County, GA on a farm that belonged to the Grest family. When she was seven, she remembers being sent to Savannah, along with her brother, to live with her grandmother. Once settled there, she tells of being secretly schooled by a freed Negro by the name of Mrs Woodhouse. “We went every day about nine o’clock, with our books wrapped in paper to prevent the police or white persons from seeing them. We went in, one at a time, through the gate, into the yard to the L kitchen, which was the schoolroom. [Mrs. Woodhouse] had 25 or 30 children whom she taught, assisted by her daughter Mary Jane.” Susan was an excellent scholar and within a short amount of time, she’d become a skilled reader and writer. She was then sent to study under another Negro named Mary Beasley where she continued her studies until May 1860 at which time Mary stated she had taught Susan all that she knew. Susan soon developed a friendship with a white girl named Katie O’Connor. Katie offered to give Susan education lessons on two conditions: that Susan secure her grandmother’s permission and that she never let Katie’s father find out. Susan agreed. The lessons lasted for about four months until the time when Katie was abruptly moved into the convent permanently. Susan never saw her again.

Putting her education to use

“I often wrote passes for my grandmother. [For] all colored persons, free or slaves, were compelled to have a pass; free colored people having a guardian in place of a master…Each person had to have this pass for at nine o’clock each night a bell was rung, and any colored persons found on the street after this hour were arrested by the watchman, and put in the guard-house until next morning when their owners would pay their fines and release them.” She also notes at this time in her life “I had been reading so much about the ‘Yankees’ I was very anxious to see them.” During church meetings in the city she attended with her grandmother, the Negroes would sing “Yes, we all shall be free when the Yankees appear!” Of course, if the watchmen were about, the lyrics would be changed to “Yes, we all shall be free when the Lord appears!” In April 1862, when the Federals were firing upon Fort Pulaski, she was sent back to the country to be with her mother.

The arrangement didn’t last long for two days later, after the fort was overrun by Yankees, she accompanied her uncle and his family to St Catherine Island where they landed under protection of the Union fleet. They remained there for two weeks before being boarded onto a Federal gunboat to be transferred to St Simon’s Island, an island inhabited by about 600 Negro men, women and children. She remembers this moment in her life with great clarity, “At last, to my unbounded joy, I saw the ‘Yankee’.” Word quickly spread among the Yankees on St Simon’s Island of Susan’s education. Commodore Golds asked her if she would take charge of the school for children who were living on the island. She agreed. It was during this time that Susan met and married Edward King, a man who was just as educated as she was. In August ’62, General Hunter, having heard many tales of how the brave Negroes of the island managed to fight off the Confederates who tried to gain access to St Simon’s, ordered Captain C T Trowbridge to visit the island to enlist the Negroes into the Union army. Susan won Captain Trowbridge’s respect upon their first meeting and he asked her to accompany the troops as laundress; her husband, as well as many of her friends and relatives, enlisted in Company E and she saw no reason why she shouldn’t join them. Susan was not only a laundress—she was whatever the army requested of her. In early 1863, several cases of varioloid (smallpox) broke out among the camp. Several men were quarantined, but that didn’t stop her from taking on the role of nurse and treating them. She would sneak into their tents and nurse them back to health. “I was not the least afraid of the smallpox,” she asserted. She also was a teacher and taught many men of Company E how to read and write during their off duty time.

Additionally, she was also a good shot. “I learned to handle a musket very well while in the regiment, and could shoot straight and often hit the target. I assisted in cleaning the guns and used to fire them off, to see if the cartridges were dry, before cleaning and reloading each day. I thought this great fun. I was also able to take a gun all apart and put it together again.” Although Susan could often be found close to the fighting, she never joined in. But after each engagement, she was ready to take care of the wounded and felt this was where her real work began. “I gave my assistance to try to alleviate their sufferings. I asked the doctor at the hospital what I could get for them to eat. They wanted soup, but that I could not get; but I had a few cans of condensed milk and some turtle eggs, so I thought I would try to make some custard. I had doubts as to my success, for cooking with the turtle eggs was something new to me, but the adage has it, ‘Nothing ventured, nothing done,’ so I made a venture and the result was a very delicious custard. This I carried to the men, who enjoyed it very much.”

In November 1865, still under the command of Trowbridge, now a colonel, the regiment was mustered out. Although all were anxious to start their lives, they disliked having to part from Colonel Trowbridge. “We thought there was no one like him, for he was a man among his soldiers…I shall never forget his friendship and kindness toward me from the first time I met him to the end of the war,” she recalled. Susan and her husband returned to Savannah where she opened a school in her home on South Broad Street. She taught about 20 Negro children on a daily basis and received a dollar per child in compensation. Just when she had settled into a routine, her husband, who had returned to carpentry after the war, passed away on 9/16/1866. Susan welcomed their newborn into the world shortly after his death. In 1872, Susan went work as laundress for a wealthy family. Her employ brought much traveling. While visiting Rye Beach, Susan won a prize for excellent cooking. Next, she traveled to Europe with the family then returned to Boston where she remained until remarrying in 1879 to Russell L Taylor.

In 1886, Susan helped to organize Corps 67 Women’s Relief Corps, auxiliary to the G.A.R. She later served as secretary/treasurer and then as president in 1893. “All this time my interest in the boys in blue had not abated. I was still loyal and true, whether they were black or white. My hands have never left undone…”

Susan reflected on her life and the times while living in Boston: “Living here in Boston where the black man is given equal justice, I must say a word on the general treatment of my race, both in the North and South, in this twentieth century. I wonder if our white fellow men realize the true sense or meaning of brotherhood? For two hundred years we had toiled for them; the war of 1861 came and was ended, and we thought our race was forever freed from bondage, and that the two races could live in unity with each other, but when we read almost every day of what is being done to my race by some whites in the South, I sometimes ask ‘Was the war in vain? Has it brought freedom, in the full sense of the word, or has it not made our condition more hopeless?’ In this land of the free, we are burned, tortured, and denied a fair trial, murdered for any imaginary wrong conceived in the brain of the Negro-hating man. There is no redress for us from a government which promised to protect all under its flag. It seems a mystery to me. They say, ‘One flag, one nation, one country indivisible.’ Is this true? Can we say this truthfully, when one race is allowed to burn, hang, and inflict the most horrible torture, weekly, monthly on another? No we cannot sing ‘My country ‘tis of thee, Sweet land of Liberty!’ It is hollow mockery. The Southland laws are all on the side of the white, and they do just as they like to the Negro, whether right or not. I do not uphold my race when they do wrong. They ought to be punished, but the innocent are made to suffer as well as the guilty and I hope the time will hasten when it will be stopped forever…”

Sources: Taylor, Susie King, Reminiscences of My Life In Camp with the 33d US Colored Troops, Published by the author, Boston, 1902