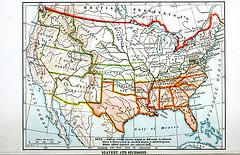 Texas was the seventh state to leave the Union. On, February 1st, Texans met in Austin and voted 166 to 7 for secession. Interestingly, the Union commander of the Department of Texas was Brigadier General David Twiggs, a Georgian. Upon secession, he ordered all military forces and stores under his command turned over to Texas authorities. On March 1st, the United States dismissed Twiggs from the Regular Army. Two months later in May 1861, the Confederate States appointed him Major General in the Provisional Army of the Confederacy.

By early February, three months after Lincoln’s election, and a month before his inauguration, seven states had left the Union. These states agreed to send representatives to Montgomery, Alabama, to form a new government. These delegates elected Howell Cobb of Georgia President of the convention. On February 8th, the delegates adopted a Provisional Constitution and the Confederate States of America were born. On February 9th, the delegates elected Jefferson Davis of Mississippi as Provisional President. Alexander Stephens of Georgia was chosen as the Confederate Vice President. On February 18th, Davis and Stephens were inaugurated as the first and last President and Vice President of the Confederacy.

On March 4th, 1861, Abraham Lincoln was inaugurated as President of the United States. Two days later, the Confederacy called for 100,000 volunteers for its provisional army. On March 11th, delegates adopted the Confederate Constitution.

Two days after the surrender of Fort Sumter, President Lincoln declared a state of insurrection and called for 75,000 volunteers to put down the rebellion. The Northern states quickly answered the call, but the remaining Southern states that had not seceded refused to comply with Lincoln’s request. Instead, four more Southern states left the Union. The first was Virginia. On April 17th, Virginia, the traditional leader of the South, passed a succession bill 88 to 55. Significantly, Virginians had voted down a similar bill on April 4th, by a vote of 89 to 45.

Lincoln followed Virginia’s succession with an order to blockade all Southern ports. On May 3rd, Lincoln called for 42,000 three-year volunteers. Arkansas then joined the Confederacy on May 6th. The state convention had met at Little Rock and had voted 69 to 1 for secession. Tennessee seceded the same day. Earlier, on February 9th, Tennessee had held a statewide election and had rejected secession by a vote of 68,282 to 59,449. But with Lincoln’s call for more volunteers, the Tennessee State Convention met at Jackson. Delegates voted 66 to 25 for secession.

A week later, on May 13th, Great Britain declared its neutrality. On May 16th, the Confederate Congress authorized the recruiting of 400,000 volunteers. Four days later, on May 20th, 1861, North Carolina became the last state to join the new Confederacy. State delegates met in Raleigh and voted unanimously for secession. All of the states of the Deep South had now left the Union. That same day, the Confederate Congress voted to move the capital to Richmond, Virginia. On May 23rd, citizens from eastern Virginia voted to join the Confederacy. Western Virginians wanted to remain in the Union.

Four slave states -- Delaware, Maryland, Missouri, and Kentucky -- did not secede from the Union. On April 29th, Maryland held a secession convention and delegates voted secession down 53 to 13. On May 20th, Governor Beriah Magoffin of Kentucky had declared that state’s neutrality. Missouri held a secession convention in February at Jefferson City, but did not vote for secession. Delaware had all but abolished slavery by 1861. Kentucky, Maryland, and Missouri became buffer zones between the North and the South. All three of these states provided troops to the Confederacy.

Harry McCarthy wrote a song that chronicled the birth of the Confederate States of America. This was "The Bonnie Blue Flag" and follows:

We are a band of brothers and native to the soil,

Fighting for the property we gained through honest toil.

And when our rights were threatened the cry rose near and far,

Hurrah for the Bonnie Blue Flag that bears a single star.

Three cheers for the Bonnie Blue Flag that bears a single star.

As long as the Union was faithful to her trust,

Like friends and brethren, kind were we and just,

But now when Northern treachery attempts our rights to mar,

We hoist on high the Bonnie Blue flag that bears a single star.

Then came Alabama and took her by the hand.

Next, quickly Mississippi, Georgia and Florida,

All raised the Bonnie Blue Flag that bears a single star.

Ye men of valor gather round the banner of the right,

Texas and Louisiana join us in the fight.

Davis, our beloved President, and Stephens statesmen are,

Now rally round the Bonnie Blue Flag that bears a single star.

And here’s to brave Virginia, the Old Dominion State,

With the young Confederacy at length has joined her fate.

Impelled by her example, now other states prepare,

To hoist on high the Bonnie Blue Flag that bears a single star.

Then here’s to our Confederacy, strong we are and brave,

Like patriots of old we’ll fight, our heritage to save.

And rater than submit to shame, to die we would prefer,

So cheer for the Bonnie Blue Flag that bears a single star.

For Arkansas and North Carolina now both have gone out.

And let another rousing cheer for Tennessee be given,

The single star of the Bonnie Blue Flag has grown to be eleven.