The Siege of Paris during the Franco-Prussian War 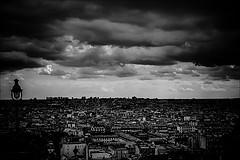 Through the first half of 1870 a confrontational fever with Germany spread throughout France. On July 15 Emperor Napoleon III led his nation "into one of the most disastrous wars in her history." (1) The Franco-Prussian conflict did not officially commence until July 19, 1870. In the course of its first weeks it produced a series of demoralizing defeats for the French. The army of Napoleon III "went to war ill-equipped, badly led, trained and organized, and with inferior numbers." (2) On August 19, one French army was trapped in the fortress of Metz and on September 1, the Empire of Napoleon III came crushing down when a second army was captured at Sedan with the Emperor himself. Three days later the news reached Paris and the fall of the Empire was proclaimed. The Empress left for England and a provisional government took power. (3) For the next five months, the "city of lights," as Parisians had proudly proclaimed "the center of the universe," was transformed. It became an army camp--French soldiers, National Guardsmen, volunteers-within, Prussian forces without. Luxuries, and then basic necessities slowly disappeared. Food became scarce, and the inhabitants resorted to edibles normally associated with other species. The government under General Trochu and leaders like Victor Hugo, Jules Favre, and Adolphe Thiers, tried to govern internal as well as external pressures. Finally, on January 27, an armistice was signed. It brought temporary calm to the capital, before the storm of the Paris commune and the second siege arrived.

The new government in Paris, after the defeat at Sedan, was composed in part by publicists, politicians, lawyers, and teachers who had opposed Louis Napoleon's coup d'etat in 1851. "The Government of National Defense" was the official title, and nearly all kinds of political opinions were included, with the exception of the Bonapartists. The actual power rested with the Legitimists, Orleanists, and other conservatives. General Trochu, military governor of Paris and an Orleanist, held the presidency. Others included Leon Gambetta-minister of the Interior, General Le Flo- Minister for War, Jules Favre-Minister of Foreign Affairs and vice-president, Victor Hugo, Count Henri Rochefort-journalist and political enemy of Napoleon III who spent many years in prison, and Adolphe Thiers-the old minister of Louis Phillipe who went on diplomatic missions for the new republic. (4) Besides the day-to-day operation of the government, the three main objectives of the Government of National Defense were the procurement of a favorable peace treaty, enlistment of the aid of foreign powers, and the military preparation of Paris. The first objective got off to a bad start on September 6 when Jules Favre announced, "France would not give up an inch of her territory nor a stone of her fortresses." (5) This attitude went counter to that of Otto Von Bismarck, Chancellor of Germany, who saw the cession of territory as being as indispensable to the Prussians as it was inadmissible to the French. Bismarck demanded the immediate turnover of Alsace-Lorraine as well as Metz, Strasbourg, and Mont-Valerien (the fortress commanding Paris). Bismarck's proposals were rejected and the government was forced to defend the city and continue the war. Negotiations continued; however, nothing concrete came out of them until the end of January when Jules Favre was sent to Versailles to discuss the terms of armistice. By this time Paris had been bombarded, food and other essential stores were nearly exhausted, and Prussian victories throughout the rest of France were a daily occurrence.

The armistice was to set up the preliminary conditions for a peace treaty to be signed. Its terms included the surrender of all French fortifications, except those serving as prisons; laying down their weapons with the exception of the Army which was to act independently for the maintenance of order, the immediate exchange of prisoners, and Paris was to pay 200,000,000 francs for war reparations within a fortnight. Also, anyone leaving the city needed a French military pass. (6) Back in September, the French government began pursuing the second objective, acquiring foreign aid, when Thiers was sent to England, Austria, and Russia to enlist help. He was sympathetically welcomed, but was unable to shore up any support. Only America showed enthusiasm for the new French Republic, however they were not yet ready to intervene on their behalf. Thiers tried again in October with the same results. From that point on he was used solely as the representative of the French government in the ongoing negotiations with Bismarck. Prior to the investment of Paris, the provisional government made efforts to prepare the military forces of the city. These efforts included: manpower allocations, defensive fortification and supplies. Troops were brought back from the surrounding provinces. General Vinoy's forces, which escaped capture at Sedan, were later consolidated with those of the provinces. Together they became the Provincial Mobile Guard. Meanwhile the National Guard furnished sufficient manpower to increase its size from 90,000 to more than 300,000 men. (7) Another aspect of the military preparation was the establishment of strong defensive fortifications. The forts in the vicinity of Paris were abandoned because it would have required too much work and time to get them ready, and the decision was made to move the defensive lines closer to the city's environs. All forests and wooded areas deemed favorable to enemy advantage were cut. Thus were the forests of Montmorency, Bundy, Boulogne, and Vincennes treated. The allocation of supplies was vital to the defense of Paris. Barracks, hospitals and factories for the manufacture of military hardware were established all over the city. Railway shops became cannon foundries, while tobacco factories became arsenals. The Louvre was transformed into an armament shop after the art gallery was moved for safekeeping. Balloons were constructed at the Orleans railway stations. (8) Hotels, department stores, theaters, and public buildings served as hospitals. The Tuileries and the Napoleon and Empress Circuses became barracks. (9) When in action, all the forces were under the Commander-in-Chief of the Army and subject to military law. Most of these actions centered on small sorties, unassumingly called "reconnaissances." In late September 1870, the objects of the sorties were to test the tenacity of the troops and probe the Prussian circle to determine its vulnerability. As for the Prussians, once the city was surrounded and more troops made available for the siege, the question was whether to bombard the capital or starve it into surrender. In his diary entry for October 8, Crown Prince Frederick states, "we shall certainly have to make up our minds to a bombardment of Paris... but to postpone as long as possible their actual accomplishment, for I count definitely on starving out the city." (10) The bombardment did not begin until January 4. The arrival of the shelling did not panic the Parisians. They had been expecting it since October.

Precautions were taken to protect all works of art. Sandbags were placed in the windows of the Louvre, the School of Fine Arts and other important buildings, while outside monuments were taken underground. The bombardment lasted twenty-three days, usually from two to five hours each night. In the end, the Parisians refused to be intimidated and the psychological advantage of this tactic was lost. The siege of Paris slowly made its impact in an area critical to survival: the economy. According to a correspondent for The Times of London, "Business for France is everywhere broken up, and one-third of the country is devastated and ruined." (11) The first segment to directly feel the enclosure was the import and export activity. In order to survive, Paris needed a self-supporting economy, while also channeling most of its resources for the defense. Factories were now employed in making military necessities, instead of consumer goods. When the siege dragged on, the prospects for a speedy recovery evaporated and finally gave out completely when the bombardment began as some of those factories, in conjunction with other businesses, were damaged. The Prussians might not have been purposely inclined to destroy the French economy, except in one particular area: food consumption. The government's failure to establish a census system early during the siege caused it to miscalculate on its supply of comestibles, playing into the hands of the invaders. The census did not take place until December 30 and it was discovered that Paris contained a population of 2,005,709 residents excluding the armed forces. (12) The government however, did ask foreigners to leave, but the number who did was offset by the arrival of refugees from the provinces. This number of inhabitants and the Prussian encirclement had disastrous consequences. Early in 1870, the price of food had increased and by the start of the Franco-Prussian conflict it was 25 percent higher. (13) Prices did not go much higher because the government announced the number of cattle, sheep, and hogs within Paris to be adequate. However, everyone, even the government, believed the siege would last a very short time, perhaps a maximum of two months. The situation did not change until the early days of October. A few days before October 15, butchers suddenly refused to sell more than a day's ration. On October 15, the official rationing of meat began and continued throughout the entire siege, each portion becoming smaller and smaller. Eventually, nothing was left and Parisians resorted to other types of meat. The first substitute for the regular meat diet was horse. Parisians disdained it, at first, and it took the Horse-Eating Society to inform the public of the advantages to eating horse. When it finally came down to eating them, all breeds were included, from thoroughbred to mules. With time even this type of nourishment became rare, so other meats were introduced into the diet. Dogs, cats, and rats (14) were frequently eaten. The animals of the zoo were added to this diet, including Castor and Pollux, the two elephants that were the pride of Paris. Only the lions, tigers, and monkeys were spared; the big cats for the difficulty of approaching them, the monkeys because of "some vague Darwinian notion that they were the relatives of the people of Paris and eating them would be tantamount to cannibalism." (15)

During the middle of January, the government placed bread on the ration list, setting the daily quota at 300 grams for adults and half that amount for children. Parisians then realized that they were on the verge of starvation. As for the Prussians, this meant a quick solution to the conflict as Frederick III writes on his diary entry for January 7, "There is news from Bordeaux that provisions in Paris would be exhausted about the end of January, and at best could only last until early in February. I trust this may be true." (16) The terrible ordeal suffered by Paris between 1870-1871 was not their first, according to a German newspaper story reprinted in The Times. In 1590, Henry IV stood before Paris much like Bismarck was doing, and the city knew nothing worse. According to the story, the people of Paris forgot what meat was and they had to subsist on leaves or roots dug up from under stones. Terrible diseases broke out and in three months 12,000 people died. Bread no longer existed while all the dogs were captured and eaten. (17) The maledictions associated with siege warfare were no strangers to Parisians; however, the peace treaty with Germany brought needed relief before the arrival of the Paris Commune with its own set of trials and tribulations.

8. Balloons served to carry the mail and diplomats outside the city safely from Prussian attack. Pigeons were used to carry messages. For more on this aspect of the siege read "Airlift 1870" by John Fisher.

14. The price of rats became so high that not everyone could afford this delicacy, which was considered of the highest quality since rats fed on cheese and grains.