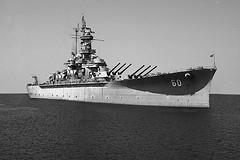 Many people know that Alabama was the name of a USS battleship that served in World War II and the name of a famous Confederate Raider that sailed during the American Civil War. However, most people would be hard pressed to identify the other six ships called Alabama. See for yourself.

The "Almost Alabama" The first ship whose name was to be Alabama was laid down in 1819. She was a 74-gun ship-of-the-line powered by sail, but took so long to be constructed, that she wasn't launched until the outbreak of the Civil War, at which time her name was changed to New Hampshire. The First Alabama The first ship to sail with the name Alabama was built in New York and acquired by the US Government in 1819. Sailing the Gulf of Mexico and the Caribbean waters the ship captured more than a dozen pirate and slave trading vessels during the 1820's. The Second Alabama The second Alabama was built in Brownsville, Pennsylvania, in 1838. She was a steam-powered side-wheeler, and she entered naval service in 1849. Her poor condition, however, caused the navy to decommission her just seven months after acquiring her. She was sold in October 1849 in New Orleans. The Two Third Alabamas Two ships carried the name Alabama during the American Civil War--one for the Union and one for the Confederacy. The Union vessel was a 1,261-ton side-wheel steamer and carried eight 32-pound cannons.

Commissioned on September 30, 1861, the Alabama was 214 feet 4 inches long, had a 35-foot beam, a 14½-foot draft and traveled at a top speed of 9 knots. During the war she operated as part of the South Atlantic Blockading Squadron off the coasts of Florida and Georgia, where she captured four Confederate vessels. The Navy decommissioned her on July 9, 1863, due to a Yellow Fever outbreak, but she was brought back into service on May 17, 1864, as part of the North Atlantic Blockading Squadron. She supported the Union assault on Fort Fisher, North Carolina, before being relegated to dispatch and ordnance transfer duty. She was decommissioned on July 14, 1865. The most famous ship to sail under the name "Alabama" was the Confederate commerce raider CSS Alabama captained by the dashing Raphael Semmes. Built in 1862 at the Lairds Dockyard at Liverpool, England, the CSS Alabama devastated Union merchant shipping from the North Atlantic to the South Atlantic and from the Gulf of Mexico to the Indian Ocean. She was powered by both sail and steam and could reach a speed of 12.8 knots. She was 211 ½ feet long, 31 feet wide, and had a 14 foot draft. She carried a crew of 145 men and officers and her armament consisted of six 32-pound cannons, one 68- pounder, and one 110-pounder. 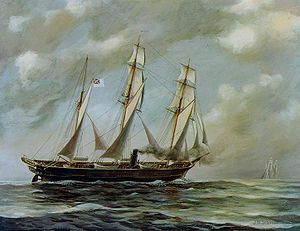 During her service, she captured 69 vessels worth over $6.5 million until she met her fate at the guns of the USS KEARSARGE at Cherbourg, France, sinking after a one-hour battle. The Fourth Alabama Construction on the Fourth Alabama (BB-8) began on December 2, 1896. She was 374 feet long and belonged to the ILLINOIS class of battleships. She possessed 16 ½ inches of armor plating and carried four 18-inch surface torpedo tubes, four 13-inch guns, fourteen 6-inch guns, sixteen 4- pounders, and four 1-pounders. She served primarily in the West Indies but made a brief tour of the Mediterranean and sailed for a short time with the Great White Fleet. She was decommissioned on November 3, 1908, and placed on the reserve rolls. On July 1, 1912, she was recommissioned and served in the North Atlantic before being relegated to training duty. During World War I, BB-8 served as the Flagship for Division 1, Battleship Force, Atlantic Fleet Training. On May 7, 1920, she was decommissioned for the second time and used for target practice.

The Fifth Alabama The keel for the USS Alabama (BB-60) was laid down on February 1, 1940, at Norfolk Navy Yard, Virginia. It took over 3,000 workers, both men and women, two and a half years of around the clock work to complete her. On February 16, 1942, just over two years after her keel was laid, the USS Alabama was officially christened. During World War II the Alabama earned six battle ribbons and nine battle stars seeing action in many fights including the Battle of Philippine Sea and the Battle of Leyte Gulf. On January 9, 1947, the Navy officially decommissioned the battleship Alabama and placed her on the reserve rolls waiting for the call to again serve her country. On September 14, 1964, after a journey of 5,600 miles, she arrived in Mobile Bay, where today she sits, guarding the causeway into the city of Mobile. The Sixth Alabama The current vessel carrying the name Alabama is a United States nuclear-powered ballistic missile submarine. Construction began on SSBN-731 on October 14, 1980, and she was christened on May 19, 1984, and commissioned on May 25, 1985. She is a Trident nuclear submarine measuring 560 feet in length, 42 feet in diameter, and displacing 18,750 tons. She carries twenty-four Trident nuclear missiles and four torpedo tubes. It takes a crew of 157 officers and men to operate her, and she continues to serve her country today. For more information: Ship Naming in the United States Navy