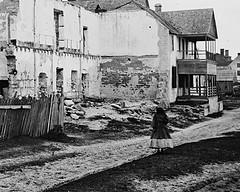 When planning this event, Sherman wrote to General Ulysses S. Grant on October 9th, 1864, informing Grant that he would "make Georgia howl." Grant agreed, and on November 16th, Sherman left Atlanta on way to Savannah. Like his mentor Grant did during the Vicksburg campaign, Sherman was to demonstrate that an army could move fast and independently, and supply itself on the march. Sherman divided his army into two wings – the left under General Slocum and the right under General Howard. Each wing was to move on a separate route, responsible for its own sustainment, and to carry 900 feet of pontoon train. Throughout Georgia, these two wings supported themselves off the rich farmland as they advanced on Savannah. Food for Sherman’s men was never a problem.

Sherman, indeed, made Georgia howl, as his army cut a path of destruction across the Georgia landscape. The march was leisurely, and as his wings advanced, they fanned out to a width of sixty-six miles. Veterans would later report that Sherman’s flanking movements along the march would be so far away from his headquarters that he instructed Slocum and Howard to burn a few barns occasionally as they marched, since Sherman could not understand signal flags, but knew what smoke meant. In their zeal, Slocum and Howard burned barns, destroyed homes, and railroads. Bands of stragglers – called "Bummers" – consumed or destroyed anything left by the army.

In less than a month, Sherman reached the coast just south of Savannah on December 10th and captured Fort McAllister three days later. He then massed his army to take Savannah, which was defended by Confederate General William Hardee and his 10,000 men. Hardee succeeded in getting his men out, and Sherman captured the city on December 21st, 1864. On December 24th, Sherman then presented the Savannah to President Lincoln as a Christmas present.

Sherman’s march to the sea was over. Sherman had completely uprooted his army and marched it unassisted through enemy territory. As foreseen by him, Sherman’s march weakened considerably the will of many Southerners to continue the fight. Many Confederate soldiers deserted when they learned what Sherman had done. Sherman’s march accomplished its goal: it had cut a path of destruction through the Confederacy and had brought the war to the people of the South.