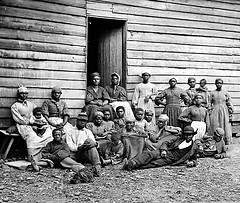 The articulation of pro-slavery literature probably rests with South Carolina Chancellor (or Chief Judge) William Harper, whose many orations, legal decisions, and articles contributed immensely to the legality of slavery in Southern culture. Two of the more prominent apologists for the institution of slavery in America were George Fitzhugh and James Henry Hammond. The most extreme was the Virginian Fitzhugh, whose Sociology for the South (1854) and Cannibals All! (1857), declared that "the natural and normal condition of laboring men, white or black" was slavery. While Fitzhugh’s arguments were a bit out of the mainstream of southern thought, Hammond’s were not. In his celebrated "King Cotton" speech to the Senate on March 4th, 1858, Senator James Henry Hammond of South Carolina vigorously reminded his colleagues that northern banks had caused the Panic of 1857, while southern slavery and cotton had saved the nation. To Hammond, this demonstrated the superiority of southern civilization.

Leading the assault against slavery were William Lloyd Garrison, Hinton Rowan Helper, and Harriet Beecher Stowe. New Englander William Garrison founded the anti-slavery newspaper, The Liberator, on January 1, 1831. Twenty-three years later, on July 4th, 1854, he publicly burned the Constitution of the United States, denouncing it as a covenant with death. Hinton Helper, a native of North Carolina, wrote The Impending Crisis of the South (1857), in response to Fitzhugh’s Cannibals All! Using statistical data from the 1859 census, Helper showed his fellow southerner the superior productivity of a free-labor society. Helper concluded that slavery was a curse that hampered the South’s economic development. Perhaps the most influential piece of sectional literature was Harriet Beecher Stowe’s virulent anti-slavery novel, Uncle Tom’s Cabin, published in 1852. The wife of a Congregational clergyman, Stowe focused on the breakup of the slave families. This theme hit a nerve with middle-class families, who cherished children. Within a year, Uncle Tom’s Cabin had sold 300,000 copies (comparable to three million today). It was translated into several foreign languages and, within a decade, Uncle Tom’s Cabin had sold more than two millions copies in the United States alone, making it the all-time best seller in proportion to population.