The Place of Danger is My Place 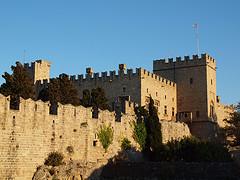 "The Place of Danger is My Place." These words were spoken by the 57 year old Pierre D'Aubusson, Grand Master of the Knights of Saint John, during the great siege of Rhodes in 1480. Like many great commanders, D'Aubusson having placed himself at the forefront of the heaviest fighting, was pleaded with by his subordinates to remove himself to a safer area. He declined their requests

The Knights of Saint John (The Hospitallers) originated in Jerusalem after the city fell to the Crusading armies in 1099. A hospice dedicated to Saint John was founded by Blessed Gerard to care for the sick and poor. Eventually Gerard and his monks were recognized as an independent order by Pope Paschal in 1113. Over time the Order evolved to include a military component charged with defending the hospital, Jerusalem and it's people.

Rhodes is a 540 square mile island that lies off the coast of Turkey (today it is part of Greece.) During the early 1300s Rhodes was under the control of a rogue Byzantine governor and, therefore, could be attacked without fear of repercussions from the Byzantine Emperor. In July 1307 the Knights landed on Rhodes. Shortly after the landing Pope Clement V formalized the right of the Knights to possess Rhodes. After another two years the island was completely secured.

Pierre D'Aubusson became Grand Master in 1476. Given Rhodes' central location in the Ottoman empire, D'Aubusson realized that hostilities were inevitable with the Ottoman Turks. Therefore, he began a program of rebuilding Rhodes' fortifications for the siege that he knew would come. After many years of deliberation the Ottoman sultan, Mehmed II, decided to attack Rhodes. An army of about 80,000 troops led by Misac Pasha began the siege in May 1480.

The Rhodes' defensive force consisted of about 600 Knights, 1500 mercenaries,and 1900 militia from the island. The fortress was divided into sectors and each sector was defended by Knights of a different nationality. During the siege the attackers used many techniques of siege warfare including: cannon, trebuchets, tunneling and wooden towers. Heavy fighting resulted in nine towers being knocked down as well as numerous wall sections.

In the middle of the siege an interesting episode unfolded concerning the famous German military engineer and artillery expert called Master George. At the end of May, Master George defected from the Ottomans to the Knights. D'Aubusson was skeptical of George's intentions but let him stay in the fortress under the supervision of six Knights. Master George then proceeded to assist the Knights in the siting of their batteries. At first the Knights implemented his recommendations. However they began to notice that every time they moved their guns to a new position the besiegers would move their guns and proceed to vigorously bombard the Knights' guns. The Knights determined that Master George was deliberating recommended sitings that had weak defensive positions. These weak positions in turn were capitalized by the Ottoman gunners. Master George was arrested, heavily questioned and tortured. After admitting guilt (perhaps induced by torture) he was hanged.

The Ottoman Turks attempted one final grand assault on July 27. After intense fighting the attack was repulsed with significant Ottoman casualties. Two weeks later the Ottomans retreated; the Knights had won.

In 1522 the Ottoman armies returned and successful dislodged The Knights of Saint John from Rhodes. The Knights moved their base of operations to the island of Malta.