The Persian Campaign of Emperor Heraclius 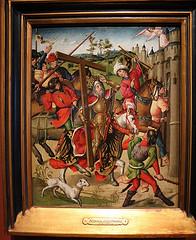 Between the years 621 and 626 A.D., the Byzantine Emperor Heraclius waged a bloody, ravaging, and exhausting war on the Persian Empire. In retrospect, three compelling reasons for such an enterprise stand out. First, to end the Persian conquests of Byzantine territory. Second, to stop Christian setbacks at their hands. And third, to satisfy the spiritual hunger of a young Emperor thirsty for honor and adventure. It was not an easy war; however, it reestablished Byzantium as the major power in Asia Minor until the rise of Islam. Of the three reasons for a Roman campaign against a powerful Persian state, the first was the most important, to put an end to the territorial bleeding of the empire. Beginning in 603(1), the Persian king Khosroes started a series of invasions and occupation of Roman lands that went on for over fifteen years. In that first year (603) he defeated the Byzantines at the battle of Arxamoun using elephants in his assault of the fortress. (2) Dara, Mesopotamia, and Syria fell the following year. Emperor Phocas hardly opposed these conquests. In taking Armenia, Kappadocia, Galatia, and Paphlagonia in 607, the barbarians routed the Byzantines every time. (3) The Persians crossed the Euphrates unopposed and ravaged Syria, Palestine, and Phoenicia advancing all the way to Chalcedon. In Heraclius' first year as Emperor (4), the Persians campaigned against Syria, taking Apamea and Edessa and proceeding as far as Antioch. According to the chronicler Theophanes the Romans "met them, fought, and were beaten... the whole Roman army was destroyed, so that very few men got away."(5) For Heraclius and Byzantium, the situation did not improve in 611, his second on the throne. The Persians captured Kappadocian Caesarea, taking thousands of prisoners.

Worse still, in Byzantine Europe the Avars were devastating the Balkans as the Roman army slowly withered. Heraclius commissioned an inquiry into the state of the armed forces and discovered that of the divisions which campaigned with Phocas against Maurice, only two remained.(6) The Emperor's first diplomatic attempt to slow the Persian tide came in 613 after the barbarians had captured Damascus. He sent ambassadors to Khosroes seeking a peace settlement, but the Persian turned them away. The following year Khosroes took Jordan, Palestine, and the holy city of Jerusalem after a three-week siege. Taken to Persia were fragments of the Holy Cross, on which Christ's crucifixion took place, the Patriarch of Jerusalem, and many other prisoners. (7) These conquests reached their zenith between the years 615 and 619 when all Egypt, Ethiopia, Libya and Carthage were taken. In 615, segments of the Persian army got as far as the Bosphorus. The loss of Egypt in the spring of 619 was crucial since it disrupted the corn supply to Constantinople. Egypt had been the richest province of Byzantium. (8) Khosroes stood poised, ready to revive the Persian Empire of antiquity. Another reason for undertaking this campaign can be categorized as a religious crusade. A powerful concept at the time, religion dominated daily life more so than in the modern era. Most actions taken by individuals, and their rulers, had the underlying tone of either satisfying God, or because He commanded. When challenged by a different ideology, the Roman state moved to oppose it. Since the lands taken by the Persians (9) were predominately Christian and conquered by a force hostile to this belief, the obvious reaction would be to undertake a major religious reconquest. In the occupied lands Christians were persecuted, harassed, and often killed.

Even the remains of the cross where Christ died, considered one of the most venerated artifacts of Christianity, was stolen and taken to Persia. (10) The city of Jerusalem experienced fire and massacre for several days. Included in the destruction was the church of the Holy Sepulcher. Prior to the start of the war, in a show of complete support, the Byzantine church contributed immensely toward the enterprise. It donated her wealth to the state which in turn melted the silver and gold icons for use as currency. The war began in what Ostrogorsky claims was "an atmosphere of religious fervor unknown in the earlier period."(11) Even the actions taken by the Emperor and his men after the war began exhibited highly accentuated religious overtones. Campaigning in 621, Heraclius began by taking an image of Christ and, putting his faith in it, proceeded to address his dispirited and undisciplined army. A year later, the Emperor invaded Persia and again addressed his troops with holy undertones. He reminded them of their duty to avenge the insults to God. They were also to retaliate for the ravishing of their maidens, the terrible things done to Christians, and to pledge murder for their murders. After this speech, Heraclius considered his army ready. (12)

Another target of the crusade was the recovery of the Holy Cross (or fragments of the Cross) taken in 614 from Jerusalem and sent to Persia. This ideal served as a goal to rally the troops around. After the conflict began, the Byzantine army behaved like a real crusading army. Before the winter of 622 arrived, Heraclius ordered the troops purified. He then opened the bible and found where he should winter, in this case Albania. (13) Upon arriving, he freed all prisoners and cared for them, most of them joining his expedition as a gesture of gratitude. Finally, as further evidence of this religious undertaking, in the spring of 630 Heraclius again set up the Holy Cross in Jerusalem amid great rejoicing. This act symbolized the successful conclusion to Christianity's first holy war. The final reason for launching such an encompassing enterprise can be attributed to the youthful, adventurous ego of Heraclius. Destined to become one of the greatest rulers in Byzantine history, he took field command in such a large scale never before seen by any emperor. (14) He showed unbelievable courage and self risk as seen in the year 624 when in the Taurus Mountains, he met the Persian general Sarbaros across from the river Saros. Many Byzantine troops charged across the bridge, but the Persian defense stopped them. The enemy broke ranks in pursuit and Heraclius marched after them. As he advanced to the Persian side, he met a big man. (15) The Emperor struck him and hurled him into the river. When he fell the barbarians turned in flight. Fighting in superhuman fashion, Heraclius nobly crossed and attacked the barbarians with only a few companions, amazing even Sarbaros. He received many blows though none were serious.

Two years later on his victorious final campaign against Khosroes, the Emperor reached the Greater Zab River. There he drew battle lines in a nearby plain against a new Persian general named Rhazates. The battle commenced when the Emperor sprang forth ahead of everyone to meet a Persian officer whom he then overthrew. He met and overthrew another. A third Persian struck him with a spear and wounded his lip but the Emperor was able to overcome this attack and kill him. Once the fight was underway his horse was wounded. By the end of the struggle Heraclius had many sword-strokes at his face but remained unharmed thanks to his leather armor and fighting skills. (16) He returned to Constantinople after a six years' absence, a hero who had just defeated a growing and powerful empire. He spent the following year in celebration. A combination of faith and leadership united to overcome a powerful and seemingly unstoppable force is a situation encountered few times in history. One of those times occurred between 621 and 626 A.D., when the faith of the Byzantines and the leadership of their Emperor Heraclius coalesced to end the Persian conquests of Roman territory and ultimately destroy their military might.

1- the second ruling year of the Byzantine Emperor Phocas.

9- Persians believed in two gods, one good and one evil. This faith goes back to the great Persian philosopher Zoroaster.

10- it was carried of to the Persian capital, Ctesiphon.

11- Ostrogorsky- pg. 100. Ostrogorsky believed that this was the first characteristically medieval war and the forerunner of the later crusades.

13- Theophanes- 308. This is known as the sortes biblicae, a method of divination where a question was asked and the bible then opened at random to find the answer. The Albania in question is in the Caucasus, not the Balkans.

14- Heraclius appointed the Patriarch Sergius and the Patrician Bonus as regents for his young son to rule in his absence. Ostrogorsky- pg. 100