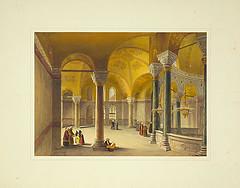 Only 80 years separate the modern Middle East from the forgotten and long-lived Ottoman Empire. Over a time span of six hundred years, from about 1300 to 1923, the Ottoman Empire expanded into the largest political entity in Europe and western Asia and then imploded and disappeared into the back pages of history. At its height, the Empire controlled much of southeastern Europe, most of the area of the present day Middle East, and parts of North Africa. In the 13th century, the region of Anatolia (most of the Asian part of present day Turkey) was controlled by the Byzantine Empire in the northwest and the Seljuk Turks in the southwest. Around 1290, Osman I (1258-1324), a Muslim warrior and leader of a small principality inside Seljuk Turk territory, declared his independence from the Seljuk sultan. The Ottoman Empire was founded. (Ottoman is derived from Uthman, the Arabic form of Osman.)

From its small bridgehead in Anatolia, Osman and his son Orhan (1288-1362) began expanding their lands northwest into Byzantine Empire territory and east into the rest of Anatolia. By 1481 the Ottoman Empire territory included most of the Balkan Peninsula and all of Anatolia. During the second great expansion period from 1481 to 1683, the Ottoman Turks conquered territory in Syria, Egypt, Mesopotamia (modern Iraq), and Hungary. At its apogee, Suleiman the Magnificent (c. 1495-1566) ruled the Empire and oversaw important achievements of Ottoman culture. In 1683 the Turks attempted to continue their European expansion by attacking Vienna in July. The assault failed; the slow decline of the Empire had begun. Problems within the army (over pay and recruitment) as well as government corruption and civil unrest were the main catalyst for the decline. Through a series of unsuccessful major conflicts and subsequent treaties the Empire lost most of its territory. Egypt was temporarily lost to Napoleon in 1798 then permanently lost in 1882. Greece was lost after the Greek War of Independence (1822-1827). War with Russia (1877-1878) resulted in the loss of more Balkan Territory.

The Empire tried to modernize its army and implement political and economic reform but it was too late. In 1908 the Young Turk movement, led by a coalition of nationalist groups, revolted against the authoritarian regime of the sultan and setup a constitutional government. In World War I the government joined forces with the Central Powers. When the Central Powers were defeated, the Ottoman Territory was greatly reduced and the borders were aligned roughly with present day Turkey. After the war, from the years 1919 and 1923, Mustafa Kemal led a national uprising (the Turkish War of Independence) against the last Ottoman sultan which laid the foundation of the new Turkish State and signaled the end of the Ottoman Empire. Selected sources: Cantor, Norman F. ed. The Encyclopedia of the Middle Ages. New York. 1999. O'Brien, Patrick K. general ed. Encyclopedia of World History. Facts on File. New York. 2000.