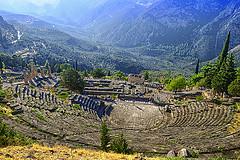 Around 1400 BCE a goat herder noticed his sheep acted strange after peering into a particular chasm on Mount Parnassus. He looked in and found himself "agitated like one frantic". At least that is how the legend goes on the humble beginnings of the Oracle at Delphi.

The effects of the brain altering vapors,were ultimately attributed to a divine source. Other people began inhaling the vapors so that they could prophesy. But the gas was so disorienting some fell into the cavern and were lost. So a tripod was built and an individual was appointed to sit over the chasm and prophesy. Originally, the perfect candidate was considered to be a young virgin girl. But after one of the virgins escaped with a young Thessalian it was decreed no prophetess (also called the Pythoness or the Pythia) would be appointed under 50 years of age.

A booming industry grew up around the Oracle. Temples were built and rebuilt, priests were trained, rituals evolved and sacrifices were performed. Priests interpreted the incoherent utterances of the Pythia. Presents were brought to both placate the deity and in the hope of influencing a positive prophesy. The Delphic temple itself became one of the largest "banks" in the world. Delphi became a center for banking and commerce.

The divine nature and associated deity changed a few times over the course of several centuries. When the profits of the Oracle began to decline it was declared that Poseidon was speaking through her. Later this changed to the goddess Themis and, finally, Apollo was determined to be presiding over Delphi.

The priests' interpretations may have been more coherent than the Pythoness but they generally remained cryptic and ambiguous. Croesus for example donated a fortune to the oracle to find out if he should invade a neighboring country. He was told "If you go to war you will cause the destruction of a great empire". He went to war and not only was defeated but was captured. He sent word to the Oracle asking why he was misled. The word came back that he wasn't misled, he had been told that there would be the destruction of a great empire and there was -- his.

The world famous Oracle of Delphi played an influential role in ancient history. For fourteen centuries it helped determine the course of empires. The prophesying was abolished in the 4th century as it conflicted with Christian beliefs that were at that time being embraced by Rome.