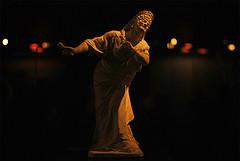 Nearly everyone has heard of Nero "fiddling while Rome burned". The true story of The Great Fire of 64 is debated but many believe Nero had the fire started to build his monumental "Golden House". There were reports that Nero climbed a tower in a stage costume and played the lyre while exulting in "the beauty of the flames". Afterwards, to assuage the throngs of homeless Romans, Nero tried to use the Christian population as scapegoats and blame the fire on them. Despite the atrocities he carried out on that population, people became convinced that Nero's soldiers had started the fire.

Nero Claudius Caesar became emperor of Rome when his adopted father and father-in-law, Claudius Caesar died in 54 AD. Although it was through family ties Nero eased into the reign of world power, Nero showed little compassion for his family members. He was only 16 years old when he came to power but it took him a mere four months to eliminate his half-brother and potential rival to the throne. Britannicus, the full son of Claudius, was poisoned while dining with Nero. When Britannicus collapsed, Nero told those at the dinner that his brother was having a seizure and had the body taken out and quietly buried.

A large part of Nero's claim to the throne was based upon his marriage to Octavia - the daughter of Claudius and his half-sister. When Nero became attracted to another woman (the wife of his best friend) he had his own wife imprisoned on a island and his friend sent to govern a remote region. After divorcing his wife he married his new girl friend, Poppaea. When he finally got around to having Octavia killed, he had her head brought back for Poppaea to gloat over. But she wasn't able to gloat for long. While Poppaea was pregnant Nero kicked her to death in a fit of anger.

While The Great Fire and the persecution of the Christians stand out in history books, the notorious event that disgusted his contemporaries was when Nero killed his mother, Agrippina. Agrippina had maneuvered her son to power through marriage and intrigue. Once he became emperor she attempted to rule through him. In the early years of his reign, Nero had shown great esteem for his mother. But when he was ready to be rid of her he had a special device rigged on a ship to make her death look like an accident. After dining with Agrippina, he had his mother placed on the ship and at the appointed time a lead-weighted canopy collapsed on top of her. However, she was seated on a Roman couch at the time and the arms of the couch saved her. So Nero had the ship capsized. Again his tough mother escaped death by swimming to shore. Finally, Nero gave up the pretense of an accident and sent his soldiers to kill her.

Nero met his own end in 68 AD when a rebellion broke out and his own soldiers refused to defend him. He tried to escape but when he was cornered he committed suicide. Aurelius Victor wrote in the Book of the Caesars 5, "For Nero in fact, spent the rest of his life so disgracefully, that it is disgusting and shameful to record the existence of anyone of this kind, let alone that he was ruler of the world."

"Chronicle of the Roman Emperors" by Chris Scarre