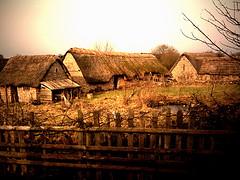 For most peasants in the Middle Ages, life centered around the village. The village was usually part of a manor run by a lord or someone of noble birth or a church or an abbey. Most peasants never ventured out of the village during their lifetime.

Most peasants worked their land with either horses, oxen, or a combination of the two. Because of the difficulty of turning a plow and its team around, farmers plowed a straight line as far as they could in a single day. The following day, the farmer would turn his team around and plow back in the opposite direction. Unscrupulous farmers would sometimes try to pick up a little bit of precious land by swiping some of their neighbors land in a process called furrow stealing. As a farmer plowed the edge of his own land, he might move over into his neighbor's land and plow a few furrows, claiming them as his own. Furrow stealing often lead to fines levied by the lord's court.

Not all peasants in the village farmed. There were blacksmiths, tapers, ale makers (usually women), potters, and all-around handy men. These residents of the village also owed fees and services to the lord but usually not as much as those who worked a large amount of land.

Free peasants also lived in the village. Free peasants owned their land outright and did not owe any service to the lord of the manor.

Peasants and lords lived in a symbiotic relationship, each providing something the other needed. The lord received goods, services, and some cash to keep the manor running while the peasants received justice, protection, and services that would have been too expensive for a peasant to provide himself.