Marriage in Ancient Mesopotamia and Babylonia 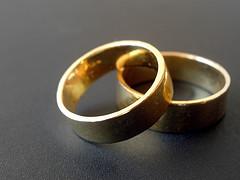 As the bride approaches the ceremonial altar holding on to the arm of her father, the groom nervously takes a peek at the scene surrounding him. Not far away are the gifts, which shortly will be exchanged. Family members stand proudly around in a festive atmosphere. Is this taking place in upstate New York, a tropical garden in Miami, or a quaint old church in old Montreal? Perhaps, but it could well have happened somewhere in ancient Mesopotamia. In western society some aspects of modern family relationships and composition can be traced to ancient Mesopotamia and Babylonia. Ideas such as the wedding, marriage, and divorce began developing then. Through innumerable legal documents from the Sumerian to the Seleucid period, we see the individual as father, son, brother, or husband. The root of these relationships started with a proposal, followed by the marriage contract, and ending with the wedding. The young Mesopotamian couple then chose where to live. In certain circumstances, the male had to decide whether to have another wife or a concubine. In no time, the newlyweds begot children. The father, as the head of the family, had complete authority over them. This authority extended to such matters as adoption and inheritance. How big the family unit got depended where in Mesopotamia it formed.

The family unit in Mesopotamia was small and restricted, although in certain regions of southern Babylonia clan like or even tribal organizations of some sort existed. In neo-Babylonian times, a measure of family consciousness appeared in the form of ancestral family names for identification purposes. The first step in creating a family unit, whether small or clan like, is of course the marriage. Ironically, for most of history, it left the prospective bride out of the decision-making process. Marriage, regarded as a legal contract, and divorce as its breakup were similarly affected by official procedures. The future husband and his father-in-law agreed on a contract and if a divorce occurred, the father-in-law was entitled to satisfaction. The contract made between suitor and the father of the expected bride stipulated a price for the maiden's hand. She received the sum given to the father. If the marriage did not produce children then the price the groom had paid for his wife was returned to him upon on her death, if it had not been returned previously. Lack of children was not the only reason for returning the price paid for the wife; her death could create a refund. Once married, the girl became a full member of her future husband's family. If he died, she would marry one of his brothers or, if he lacked brothers, one of his near relatives. If these conditions did not take place, her father returned all his rights over her, and gave back all the presents that she had received except those consumed. Conversely, if the girl died, and her intended husband did not want to marry one of her sisters, he would take back all the presents that he had given her.

An agreement once reached indicated that the actual wedding ceremony could now take place. This ceremony took the form of the delivery of the wife to her husband. If both belonged to the class of free citizens, the husband veiled his bride in the presence of witnesses and solemnly declared 'she is my wife'. During the ceremony of betrothal, the girl's future husband poured perfume on her head and brought her presents and provisions. After the wedding, where the couple would live remained the sole issue. Married life might begin with either the bride staying in her father's house or going with her husband to his. In the former case, the husband gave the wife a sum called the dumaki toward the maintenance of the house. If the husband died this contribution remained the widow's property only if the deceased had left neither sons nor brothers. If, on the other hand, the young couple went to live in the husband's house, the wife brought with her a sherigtu, or dowry.

The sherigtu, with the presents the bride had received, remained the inalienable property of her children, and her husband's brothers could not claim it. Besides these presents, the bride might receive a marriage jointure or nudunnu, a special gift made to her at the time of her engagement. The nudunnu remained her property even if she divorced. Finally, she also would receive a present of gold, silver, lead or food for consumption at the wedding feast. After the wedding, husband and wife settled down to the routines of daily life. For the husband this was usually his only marriage, as long as the wife lived and provided children. It was not uncommon however, to have another spouse or even a concubine.

The only occasion regarded as justifiable and legitimate for a man to take another woman was in the event the first wife proved to be infertile. In spite of this reason, the husband might keep not only his wife, but also a concubine. The mistress was entitled to wear the veil only when she accompanied the legal wife outdoors. This right, which the Code of Hammurabi had granted to the Babylonians, remained in force for nearly five hundred years. This right however did not permit the husband to have two 'wives'; this title belonged to the legal wife from the moment that he placed the veil upon her. By comparison with the latter, the concubine would always occupy a slightly inferior position. Originally chosen from among the slaves, she had to do her duties with proper respect for the legal wife. Usually out of these relationships, whether with single wife or a spouse and a mistress, the first child was born. The birth of the first child marked another step in the husband's life; he was now the head of a family.

There were rarely any limits to a father's rights over his children. He could, for instance, deposit them with a creditor as security for the repayment of a debt. In certain legal documents he appeared as 'master' or 'owner' of his child, a concept entirely alien to the modern idea of a father. He also had the right to adopt additional children. They obtained the same rights of inheritance as the other male children in the family if this was not to the detriment of the sons born in wedlock. The ceremony of adoption took place in the presence of witnesses. In return for his newly acquired rights, the adopted child gave a small present to his new father. The new father gained very extensive rights over the adoptee. He could end the adoption at his pleasure and send back the child. If the child renounced his adoptive family, he would simply be expelled and returned to his home.

An example of this powerful right appears as a law under the Code of Hammurabi. This law stated that the son of a woman in a vow, or devotee, who repudiated his foster parents, had his tongue cut. As for the inheritance, the first-born child received a preferred share in the paternal estate. In the early Babylonian period, provisions were also made to insure the daughter's dowry and the younger son's marriage expenses. Normally, brothers held in common the inherited fields and gardens to prevent their division into smaller lots. They often lived with their families in their father's house. The widow continued to live in her ex-husband's house as expected and to be supported by her children. If she had children by an earlier marriage living on their own, those of the second marriage could send her back to them as their responsibility.

As previously stated, the components of a modern family including marriage, wedding, and the relationships coming about from the birth of children goes back to Mesopotamia. The Mesopotamians codified this aspect of human life and established for almost every possibility a law or code of behavior starting an evolution still going on today. Further reading: Contenau, George. Everyday life in Babylonia and Assyria. London. Edward Arnold Publishers Ltd. 1954 Oppenheim, A. Leo. Ancient Mesopotamia. Chicago & London. The University of Chicago Press. 1964 Fairservis, Walter Ashlin. Mesopotamia, the civilization that rose out of clay. New York