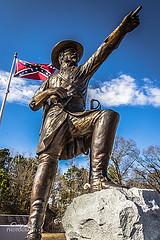 In early April 1865, Union General William T. Sherman was relentlessly pursuing Confederate General Joseph E. Johnston through North Carolina. When news of Lee’s surrender to Grant reached Johnston on April 14th, he sent a message to Sherman asking for a meeting to discuss terms of his army’s surrender.

The two generals opened negotiations on April 16th. Because his army was not surrounded, nor in the poor condition that Lee’s Army of Northern Virginia had been in when it surrendered, Johnston wanted terms different than those Grant had given to Lee. Aware of the guidance President Lincoln had given to General Grant at City Point, Sherman decided to offer generous terms for the surrender of Johnston’s men. Like most senior Union officials, Sherman feared that Johnston’s men might disband quietly and take to the hills and fight a protracted, guerrilla war.

On April 18th, Sherman offered Johnston terms similar to those Grant gave to Lee. In addition, Sherman would grant all surrendering Confederates United States citizenship. Pleased with these terms, Sherman forwarded them to Washington for approval. Unfortunately, many Northerners sharply criticized Sherman for being too lenient. Senator William Sprague summed up the feelings of many in Congress when he wrote a letter to President Andrew Johnson calling for the immediate removal of Sherman from command.

Seeing his friend in trouble, Grant traveled to North Carolina and Sherman’s side. Upon arriving at Sherman’s headquarters, Grant explained the situation in Washington, and in the North following the assassination of President Lincoln. Then Grant showed Sherman a letter from Lincoln on the former president’s feelings regarding the surrender of Confederate forces. Sherman immediately requested another meeting with Johnston.

In the meantime, over 8,000 men had deserted Johnston’s army. Realizing his men were tired of fighting and on the brink of total desertion, Johnston signed the surrender of his army to Sherman on April 26, 1865. His soldiers were to stack their arms at Greensboro, North Carolina, and go home, while Johnston had to sign a statement saying he would never again take up arms against the United States. This completed the second largest surrender of Confederate soldiers.