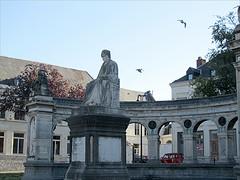 War correspondents are, according to ABCNews.com, "the grunts of the journalism world ... covering dangerous wars in obscure places for the world's media." From ancient times to World War II to the modern conflicts in the Middle East, journalists and scribes have taken calculated risks and put themselves in harms way to inform and to explain important historical events to the public.

One of the defining events of the Middle Ages was the Hundred Years War that lasted from 1337 to 1453. One of the most famous chroniclers of that period is Jean Froissart. Could he have been a medieval war correspondent gathering information, talking to combatants and talking notes during the fury of battle?

Froissart (c 1333 - c 1410) was born in France and traveled throughout Western Europe including England, Scotland, Italy and the Low Countries. He is best remembered for his books (referred collectively as the Chronicles of Jean Froissart) that covered events occurring in Western Europe between about 1325 and 1400. 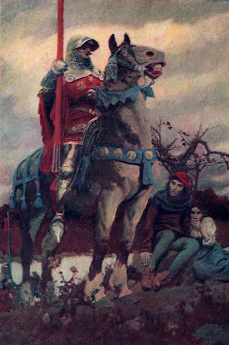 Allegedly Froissart accompanied Edward the Black Prince during his campaign at Castile in Spain. (Edward was the first son of Edward III, King of England. His nickname is said to be either from the color of his armor or the ferocity of his temper.) In early 1367, Edward moved from his base in Southwestern France to help Pedro the Cruel recapture the throne of Castile in Spain. If Froissart had accompanied Edward he would have crossed the Pyrenees with Edward's army of about 24,000 men. On April 3, 1367 he would have watched Edward engage a combined French and Spanish army at Nájera. He might have seen the English longbowmen fire upon the Spanish light cavalry. He might have witnessed an attack led by the famous French leader Bertrand du Guesclin and the subsequent break out of grim hand-to-hand fighting. Finally he might have seen the English banners raised in victory.

Was Froissart with Edward at the battle of Nájera? "...the Englishmen and Gascons alighted off their horses and every man drew under their own banner and standard in array of battle ready to fight. It was great joy to see and consider the banners ..." from the Chronicles of Jean Froissart.