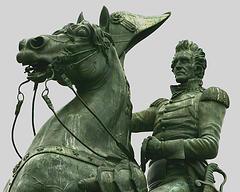 The disagreements President Andrew Jackson had with Vice President John C. Calhoun in the beginning of their administration were nothing compared to what would take place over the issue of tariffs.

Tariffs, or taxes on imports, were hurting an already struggling South Carolina, which was trying to deal with low cotton prices and high prices on imported manufactured goods. In 1828, before the Jackson-Calhoun ticket was elected, Congress passed the Tariff of 1828. In response, Calhoun wrote South Carolina Exposition and Protest. In the document, which he did not sign, Calhoun argued that the "whole system of legislation imposing duties on imports,--not for revenue, but the protection of one branch of industry at the expense of others,--is unconstitutional, unequal, and oppressive, and calculated to corrupt the public virtue and destroy the liberty of the Country. . . ." He argued that a state, when it believed a Federal law was unconstitutional, could nullify the law in that state and not enforce it. It was hoped by many in South Carolina that when the Jackson-Calhoun ticket was elected, the Tariff of 1828 would be abandoned or lessened and nullification would not become necessary.

The differences between Jackson and Calhoun began to emerge a year into Jackson's administration. Up to this point President Jackson's views on the matter had remained a mystery, but Calhoun was squarely in the states' rights camp. At a dinner in 1830, Jackson was asked to give a toast, which he did, proclaiming the preservation of the Union over all else. His views were now known -- he was against nullification. Calhoun tried to respond by advocating liberty before union, but he accomplished little and the issue remained unresolved for the time being.

A few months after the dinner, the split between Jackson and Calhoun increased even more. Jackson became aware of documents written by his vice president in 1818 urging censure of Jackson for Jackson's invasion of Florida and the capture of Pensacola during the First Seminole War. Jackson had had enough. He cut off Calhoun and removed Calhoun's allies from the cabinet.

In 1830, the debate over tariffs began to heat up when Connecticut Senator Samuel A. Foot proposed a resolution that would restrict the sale of federally-owned land in the western states. Westerners denounced the proposal as an attempt to strengthen the economy in the eastern states at the expenses of those in the west. Southerners jumped on the issue. They echoed the sentiments in the west and hoped that the westerners would realize that this was equal to the protective tariff that was hurting the south.

President Jackson made an effort to appease the nullifiers by urging the reduction of tariffs. Congress did pass some reductions in 1832, but they were not enough to satisfy the discontented.

In 1832, South Carolina held a special convention, at which they passed an ordinance declaring the 1828 and 1832 tariff acts unconstitutional and ordered that no taxes were to be collected. The same year the South Carolina legislature elected Senator Foot as governor and to replace Governor Foot in the Senate, they elected John C. Calhoun.

Calhoun resigned the vice-presidency and took his seat in the Senate where he defended the nullification position of South Carolina.

In response to South Carolina's Nullification Ordinance, President Jackson sent several warships and hundreds of soldiers under the command of General Winfield Scott to Charleston to enforce the laws of the land. South Carolina in turn suspended the Nullification Ordinance and Congress passed a law reducing the tariffs over the course of a decade.

In the end, Jackson had proved the power of the Federal Government to enforce the laws, even when the states do not like them or feel they represent a detriment to their state or cause. Bloodshed over the issue of states rights was averted -- but only for 30 years.