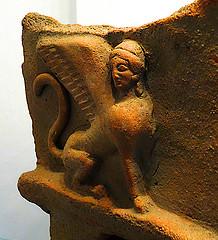 About 2500 years ago, the Persian Empire was expanding through Asia and into Asia Minor (the area between the Black and Mediterranean Seas) and taking control of the eastern world. A Persian ruler was installed over every city-state that they conquered. It was this action that eventually provoked the Ionian revolt which marked the beginning of the long confrontation between the Greek and Persian empires.

About BC 550, Cyrus I, emperor of Persia, conquered the territory of Ionia (the west coast of Modern Turkey). For all of their advances in science and mathematics, these well-established city-states seemed the most prominent in Greece. The people of Ionia, were discontent with their new, dictatorial rulers. The Persian rulers knew the feelings of the populace, but did little to alleviate the hostilities. Around BC 500, Artaphrenes, ruler of the western capital of Persia (Sardis) met with other leaders of Ionia. Seeing that many of them were anxious for gains in power and land, he made them agree not to attack each other. Artaphrenes knew that internal conflict could result in disintegration of the empire.

In BC 499, Aristagoras, the ruler of the Ionian city Miletus, yearned to control the city of Naxos. He tried to gain help from surrounding cities but failed. Fearing punishment from Darius I (Persian Emperor from BC 521-486) or Artaphrenes, for breaking the agreement, he incited a rebellion. Aristagoras encouraged the Ionians to remove their leaders. In response, many cities in the area rebelled and ousted their Persian rulers. Knowing that it would not be long until Darius retaliated, Aristagoras traveled to Sparta and appealed to King Cleomenes for aid. When the Spartan leader learned of the distance his army would travel to reinforce the Ionians, he declined the request for aid

Aristagoras, now desperate for support, went to Athens for help. The Athenians, fearing an inevitable attack by the Persians, decided to support Aristagoras and sent twenty triremes along with five from Eretria. The Ionian fleet, bolstered by Athenian and Eretrian ships, sailed to Ephesus in BC 498. The ships were moored at the port of Coressus and the soldiers followed the river Cayster to Sardis. The Allied Greek force marched into the city where they met little resistance. As they marched deeper into the city, they finally engaged Artaphrenes (ruler of Sardis) who was defending the citadel. Not able to capture the citadel, the Ionians set the city ablaze and retreated to Ephesus. Persians troops in the area met the Greeks at Ephesus and massacred most of them. The remaining Ionians scattered to the surrounding cities.

Despite the great setback of losing so many men, Aristagoras continued his fight against Persia. He encouraged more revolts in Western Asia Minor, Thrace and Cyprus. Aristagoras sent part of his fleet to aid the Cyprians, but the Persians thoroughly defeated the Cyprian army. Darius I decided to attack Caria, a city with close ties to Miletus, Aristagoras' city. When the Carians learned of this plan, they ambushed the Persian army at night and annihilated it. Four Persian generals died in the battle. Although their deaths were a great loss, Persia continued to reclaim cities.

Seeing his rebellion collapse and fearing for his life, Aristagoras fled to Mycrinus. He gave command of Miletus over to Pythagoras, a mathematician. Aristagoras, frustrated with his failed rebellion, attacked the Thracians, but in time, he and his army were cut off and destroyed.

After Aristagoras left Miletus, the Persian fleet sailed to Lade and destroyed the Greek fleet defending the city. Darius and his army captured Miletus in BC 494. After the city-state fell, the revolts in the Persian Empire crumbled, due to a lack of leadership.

The revolt had several lasting effects. The Ionian enlightenment ended. Darius I's anger for Athens grew, because of the aid they provided to the Ionians, and gave him the incentive to invade Greece. The rebellion had clearly shown that the empire was unstable, and vulnerable to internal conflicts.