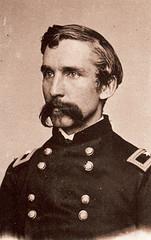 Almost a decade has passed since he gave us the commanding performance as Colonel Joshua L. Chamberlain in the film Gettysburg. Now, Jeff Daniels reprises his role in Gods and Generals, the prequel to Killer Angels—the novel upon which the film Gettysburg was based. Due to hit theatres in February 2003, Gods and Generals was produced by Ted Turner Pictures and filmed in and around Sharpsburg, Maryland and actual historic locations in Virginia and West Virginia. Jeff graciously granted me an interview to talk about his portrayal of Colonel Chamberlain.

Kimberly J. Largent: When you were approached to reprise your role of Joshua L. Chamberlain in Gods and General, what were your sentiments?

Jeff Daniels: There was a sense of ownership of the role. Even a sense of duty to finish what I started. As an actor, no one was going to touch that part. Over the years, I’ve gotten so much positive response for the film and my portrayal that to have the chance to carry it on meant a great deal to me.

Largent: You seemed to effortlessly assume the role of Col Chamberlain in the movie Gettysburg, was it as simple as you made it appear? When you began shooting Gods and Generals, was the transition back to Chamberlain an easy one or did it require effort?

Daniels: Before Gettysburg, I dove headfirst into everything I could find about Chamberlain, the Civil War, and that particular battle. I traveled to Maine and visited the Historical Society dedicated to his life. I met with the scholar and writer Tom Desjardins, who was very helpful in my attempts to understand the man behind the myth. Years later, returning to the character was like looking up an old friend who has been waiting for you to call.

Largent: At any point during the filming of Gettysburg or Gods and Generals, were you ever compelled to learn more about Chamberlain’s life before or after the war? If so, what did you find intriguing about him? If not Chamberlain, were there any other characters [to whom] you were specifically drawn?

Daniels: Because of both films, I’ve become a student of the Civil War. It was such an important time in our nation’s history. Chamberlain’s role in it, while crucial in some instances, is just one of thousands of stories big and small that occurred during that period. Along with Ken Burns’ wonderful film The Civil War and the numerous books on Chamberlain and his life in and out of the war, I truly enjoyed Shelby Foote’s The Civil War: A Narrative. Those three volumes are full of so many heroes, goats, and villians.

Largent: When you were on location in Gettysburg, PA several years ago, or Sharpsburg, MD more recently, was there any moment in time when you were “struck” by the harsh realities of the Civil War?

Daniels: Obviously, the conditions of American life were much harsher compared to today. Never did I think I was anywhere near experiencing anything close to what they might have endured. The commitment of the soldiers to their respective causes and what they tolerated, we could only pretend. Acting is make believe for grownups, but you really get a sense of that when you do a film like Gods and Generals. For starters, our guns aren't loaded.

Largent: Had you lived during that time period, what role do you see yourself having played?

Daniels: Like Chamberlain, I would like to think I have what it takes to have been an officer. Being an actor, however, I might have ended up becoming the Civil War’s answer to Bob Hope...

Largent: In the late ‘90s, you flawlessly executed the role of George Washington in A&E’s The Crossing. Which role, that of Chamberlain or Washington, was harder to master and why?

Daniels: Playing Washington was no different than attacking any role. I work very hard to make every character I play as unique as possible. Like a lot of things, it's in the details. The similarities I found between the two, aside from their historical impact on the country, was their commitment to what they were doing; particularly, at the moment of crisis. They were both alone at a time of great decision—Chamberlain on Little Round Top and Washington before the Battle Of Trenton. There were no committees, no helpful advice from subordinates; just themselves, alone, coming up with what they thought would work.

Largent: To say you are a very fascinating and extremely versatile actor would be an understatement—that’s very apparent in your ability to play Col Joshua Chamberlain in Gettysburg in 1993 and then Harry in Dumb and Dumber in 1994. Which character was more of a challenge?

Daniels: The difficulty in performing in things as diverse as Gettysburg and Dumb and Dumber is trying to make both those characters real. I love the range of many of my career choices. As an actor, if I can make the audience forget Chamberlain when they're watching Dumb and Dumber and only forget about Harry when they're watching Gettysburg and Gods and Generals, I’ve pulled it off.

Largent: Might we see you in The Last Full Measure?

Daniels: C. Thomas Howell (Tom Chamberlain) and I are the only actors who have a chance to play the same roles in all three films. I hope we get the opportunity to complete the trilogy. A special thank you to Jeff Daniels for taking time out of his busy schedule to accommodate our request for an interview.