Harriet Beecher Stowe: The little woman who wrote the book that started this great war. 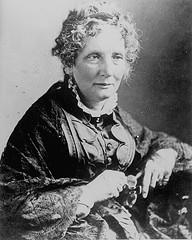 It is reported that upon being introduced to Harriet Beecher Stowe in 1862, Abraham Lincoln fondly commented she was "the little woman who wrote the book that started this great war."

Although President Lincoln's comment was certainly made in jest, in truth, Stowe's novel was indeed instrumental in awakening the abolitionist cause, which was a major factor in turning a nation against itself for four arduous years. Harriet Beecher Stowe was born 6/14/1811 in Litchfield, CT to Dr. Lyman Beecher and Roxana Foote Beecher. She was the seventh of eight children (Lyman's subsequent marriage would bring her three more siblings). Her father, a leading Calvanist congregational minister, abolitionist, and founder of the American Bible Society, often expressed his abolitionist views through his Sunday sermons from the pulpit. When at home, he encouraged his children to question everything and often led his family in debating issues of the day. Roxana, a firm believer in education, continued her own education throughout her adult life all the while raising her children.

The Beecher brood internalized characteristics from both parents with each child enjoying a copious education and an unwavering commitment to religion-although Harriet would struggle intensely with her religious beliefs before finding rest later on in her life. Harriet was of a mischievous nature-which is evident in a particular story she recounts from her childhood. "Mother was an enthusiastic horticulturist in all the small ways that her limited means allowed. Her brother John, in New York, had just sent her a small parcel of fine tulips bulbs. I remember rummaging these out of an obscure corner of the nursery, one day when she was gone out, and being strongly seized with the idea that they were good to eat, and using all the little English I then possessed to persuade my brothers that these were onions, such as grown people ate, and would be very nice for us. So we fell to, and devoured the whole, and I recollect being somewhat disappointed at the odd, sweetish taste, and thinking that onions were not as nice as I had supposed."

Harriet's childhood home was a modest, yet lively one that had been renovated through the years to accommodate each child. One section of the home had been dedicated to music and included a piano, flute and was often filled with song and laughter. When shenanigans were at rest among the Beechers, their attention was focused on intellectual conversation. Harriet was in awe over her uncle Captain Samuel Foote who would often visit after returning from a foreign port-his arms laden with gifts for the nieces and nephews. Harriet found him to be a "man of great practical common sense, united with large ideality, a cultivated taste and very extensive reading." Harriet's mother passed away before her sixth birthday leading Harriet to fiercely hold on to every memory she could recall. "I remember a time when every one said [mother] was sick. I used to be permitted once a day to go into her room, where she lay bolstered up in bed. I have a vision of a very fair face with a bright red spot on each cheek, and a quiet smile as she offered me a spoonful of her gruel; of our dreaming one night, we little ones, that mama had got well, and waking in loud transports of joy, and of being hushed down by some one coming into the room. Our dream was indeed a true one. She was forever well; but they told us she was dead, and took us in to see something that seemed so cold and so unlike anything we had ever seen or know of her."

Later in life, Harriet spoke fondly of her mother. "I think that her memory and example had more influence in molding [our] family, in deterring from evil and exciting to good, than the living presence of many mothers. Within two years of her mother's death, Lyman married Harriet Porter in a surprise ceremony that took place while he was out of town. When he returned with his new bride, Harriet came face to face with "a beautiful lady, very fair, with bright blue eyes, and soft auburn hair bound round with a black velvet bandeau...smiling, eager, and happy-looking and coming up to our beds, kissed us, and told us that she loved little children and would be our mother" Harriet went on to a school for young women and focused intently on the art of English composition. She specifically remembered being only nine years old when she wrote her first composition on The Difference Between the Natural and Moral Sublime. Harriet's mind was slowly awakening and those around her weren't blind to the fact. She was quickly appointed one of the writers for the annual exhibition. Her subject? "Can the Immortality of the Soul be proved by the Light of Nature?"

Religion also was becoming increasingly important to her. Although she enjoyed listening to her father's sermons that at times touched her so deeply that her heart swelled and tears filled her eyes, she was becoming restless with her father's Calvanist views. Even so, she was able to recognize the depths of her compassion and knew that she wanted to make a difference in the world. She didn't know how, but at the age of nine, Harriet Beecher knew she would make a difference. On the brink of her teen years, Harriet's favorite sister Catherine became engaged to Yale Professor Alexander Fisher. Prior to the marriage, Professor Fisher was sent on an errand aboard to purchase books and mathematical instruments for the school. The ship on which he sailed wrecked on a reef off the coast of Ireland and he did not survive. Catherine was devastated but turned her grief into purpose and dedicated herself to the education of women by opening a school in Hartford called the Hartford Female Seminary where she was determined to, "find happiness in living to do good." It was there, in 1829, Harriet joined her and assisted in running the school.

In 1833, at the age of 22, Harriet moved to Cincinnati OH after her father was tapped president of Lane Theological Seminary. During this period of her life, Harriet struggled with her religious beliefs. She wrote many letters to her siblings debating the topic and freely expressing her unrest. It wasn't until five years later, after her marriage to Calvin E Stowe, a Lane professor, that Harriet's beliefs shifted away from her father's to become her own that she rejoiced in her Christianity. As her faith renewed, Harriet wrote to her brother Edward: "I have never been so happy as this summer. I began it in more suffering that I ever before have felt; but there is One whom I daily thank for all that suffering, since I hope that it has brought me at last to rest entirely in Him." Cincinnati, merely a stone's throw from slave-state Kentucky, was where Harriet witnessed slavery firsthand. When she and Calvin learned that one of their servants was a runaway slave, they immediately sought her passage to the next "safe" house on the Underground Railroad.

It was also Cincinnati where she learned of a woman, a young runaway slave, who ran across the frozen river with a baby in her arms in hopes of setting free the infant child. That incident stayed with her and later became one of the more poignant scenes in Uncle Tom's Cabin. Harriet joined a literary society where she premiered many articles that would later be published in magazines. Next, she co-authored a book entitled Primary Geography for Children. At this point in her life, not only was Harriet writing, she was also raising six children. In 1850, Professor Stowe was invited to join the faculty at Bowdoin College. The Stowe family moved to Maine and resided in Brunswick The majority of Uncle Tom's Cabin was written in Brunswick during a time when Harriet was feeling very distressed over the passing of the Fugitive Slave Act that made it a crime for citizens of free states to give aid to runaway slaves. She created characters for the book based on real people and real events that had taken place that she was witness to, or had heard firsthand accounts. She added her own grief over the death of her son Charley, who died of cholera, to the manuscript. She figured her grief over the loss of her son was no different than the grief felt by the Negro mothers when their children were sold out from under them. Harriet also called upon her children's personalities for several of the characters.

The completed works first appeared as a series that ran in The National Era, an abolitionist newspaper. The series was so successful that in 1852 it was published in book form in two volumes and quickly became a best seller in the United States, England, Europe and Asia. It was translated into over 60 languages. In a way, Lincoln's supposed comment to Harriet, accrediting her with starting the war, held some truth. Her book brought to light the agonies of the life of the slaves. Harriet's carefully chosen words had not alienated readers but instead moved and inspired Americans to address the issue of slavery. Harriet's name soon became a household word in the United States and abroad. She was invited to the British Isles in 1853 where she was lauded incessantly. Quickly, she accumulated a following of women whom she encouraged to use their influence to collect petitions against slavery, spread information, and give lectures on the subject.

Most of Harriet's writings were loosely based on some aspect of her own life For example, in her novel The Minister's Wooing, she draws on her own emotions over the loss of her son Henry who at the age of 19 drowned while swimming in the Connecticut River in New Hampshire while attending Dartmouth. Frederick, born 1840, was her inspiration for the character Tom Bolton in We and Our Neighbors and My Wife and I-dedicated to a compassionate understanding of alcohol as a disease, not a social failing. In life, Frederick had been an alcoholic and only Harriet had been able to see it as a disease and not a moral failing. Georiganna, born 1843, provided the mischief and liveliness for the character Topsey in Uncle Tom's Cabin. The twins Eliza and Harriet, born 1836, provided the personalities for the young women in My Wife and I and We and our Neighbors. Our Charley is based on Charles who was born in 1850.

The Stowes moved to Andover, Massachusetts in 1853 where Calvin took the post of professor of theology at Andover Theological Seminary. He remained in that position only a year before retiring. The two settled in Hartford Connecticut where they purchased a modest home at 73 Forest Street. Shortly after their arrival, a young Samuel Clemens and his family moved into an elegant home located across the street. Harriet's husband died in 1886, leaving her with a great void. She remembered him fondly and always recalled encouraging words he gave her in 1840. "My dear, you must be a literary woman. It is so written in the book of fate. Make all your calculations accordingly." She lived another 10 years until her death in 1896. She died at home with her son the Reverend Charles Edward Stowe and twins Eliza and Harriet at her side. Her other children had preceded her in death. She is buried alongside her husband and son Henry in the cemetery connected to the Andover Theological Seminary. Source: Harriet Beecher Stowe: a life by Joan Hedrick, 1993