The Handsome Young Irishman of the 95th IL Infantry 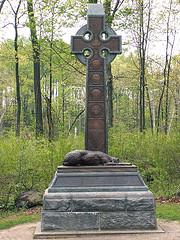 Although Albert D. J. Cashier stood a mere 5'3" and weighed only 110 pounds, he was known among his comrades in the 95th Illinois Infantry for his military comportment and fearlessness on the battlefield. Years after the Civil War, veterans remembered Albert as amiable, yet aloof; handsome, but mysterious. Even so, for the most part, Albert was like any other soldier who fought in the Civil War. So, why all the fuss over the littlest soldier of the 95th?

Albert D. J. Cashier was born Jennie Irene Hodgers on December 25, 1844 in Ireland and although many historians have tried to find details of her life in Ireland, none have been successful thus far. What is thought to be true is that in 1862, at the age of 18, she made the voyage to America as a stowaway. Upon her arrival in the states she assumed the identity of a boy named Albert Cashier. Unable to read or write, the petite, blue-eyed, blonde-haired "Albert" decided to answer Lincoln's call for volunteers and enlisted in the army on August 6, 1862 in Belvidere, Boone County, Ill. Some assert she enlisted to be close to the man she loved—a man they say was wounded on the battlefield and later died. Others contend she was running from a stepfather that forced her to dress as a boy and work in a shoe factory. Many can speculate, but because Jennie left no diary, failed to write her memoirs, and guarded her secret in earnest, no one knows with certainty what prompted the Irish immigrant to assume a new identity and enlist in Company G of the 95th Illinois Infantry. On her enlistment papers, she's described as a 19-year-old male who was born in New York and held the occupation of farmer. For the purpose of this article, I'll refer to "Albert" as Jennie—after all, she was a young woman. Viewing her in her true light will, hopefully, open your imagination as to how it must have felt to be a woman serving as a man in the army during the Civil War.

Although Jennie was the smallest of the 17 men who enlisted that day, she was like by all. Frequently, she was referred to as the "handsome young Irishman." She and her comrades departed Belvidere and met up with men from Boone and McHenry counties at Camp Fuller. She drilled constantly and led the life of a soldier without complaint. In November of '62, the 95th journeyed to Cairo, IL and from there boarded a river steamer for Columbus, KY. They then hopped a train bound for Jackson, TN and she soon found herself part of the Army of the Tennessee, under the command of Grant, where she effortlessly proved herself on two fronts: on the march and in battle. She marched just as well, if not better, than most men in her company. Her small frame only aided her ability to withstand long, hot marches. If by chance she did have difficulties, e.g., manipulating heavy equipment, she would enlist the aid of those around her and repay their assistance by tackling their camp chores that they found distasteful—such as laundry and sewing. When it came to handling a musket, she was as skilled as the men. Her journeys with the 95th included the Red River Campaign, and the Vicksburg, and Guntown, MS engagements. By1865, Jennie and the men with whom she served became seasoned veterans. It is reported that Jennie was singled out for special assignments due to her excellent health and fearlessness. She was considered dependable and successful by her superiors. A story was reported that while on a special assignment, Jennie was taken prisoner at a Confederate outpost. During this imprisonment, she seized a gun from the guard, knocked him down, and high-tailed it back to the Union camp. As the war progressed, the 95th was heralded for its bravado in battle.

On August 15, 1865, the 95th returned to Illinois to a hero's welcome and Jennie was honorably discharged. It is estimated that during the three years she served, the 95th, marched approximately 9,960 miles and served in 40 battles and skirmishes. After the war, she remained in Belvidere for a few years taking on odd jobs. She then packed her bags and headed to a small town in southern Illinois called Saunemin, Livingston County. There, she found employment at the farm of Joshua Chesebro working as a cattle herder and assuming odd jobs. She left that position and moved closer to town where she began working at Cording’s Hardware Store. After the store closed every evening, she would take her meals with the Cording family and occasionally sleep on the floor of their home for lack of having her own residence. Joshua Chesebro resolved that matter when he built a one-room house for her on a small section of his property. She enjoyed a good life in Saunemin and even enjoyed the privilege of voting in elections long before the rest of her sex. Residents recalled how the Union veteran would mark the ballot with an X to represent a signature.

In 1899, she petitioned the government for a pension and received a Declaration for Pension in 1907. In 1910, a neighbor learned that the “old man” living in the isolated little cabin was ill and summoned a nurse to check in on the loner. That nurse became the first person to know Jennie's secret. She was also the best at keeping that secret and never betrayed Jennie. In 1911, at the age of 66, while working on a motor car in Senator Ira M. Lish's garage, Jennie was accidentally struck by the automobile and among her injuries was a fractured leg. A physician was called and her secret was once again revealed. Both the physician and senator were shocked, but promised Jennie that they would keep her 49-year-old secret.

Jennie, now totally disabled, needed constant care and it was decided by both the senator and her physician that she should be admitted to the Soldiers and Sailors Home in Quincy, Illinois. At this time, she was receiving a $70-a-month soldier's pension. During admission, the superintendent of the home, as well as a staff physician, were made privy to her past, but sworn to secrecy. She entered the home under the name of Albert Cashier and was very social with the other veterans—not the least bit shy in recounting her share of war stories. Although much was done to keep her secret, it did find its way to the public, unbeknownst to her. At one point, a reporter who knew her true identity was granted a visit with her and although he repeatedly asked questions about her real identity, she ignored him, maintained her masculine identity, and continued reciting stories of what it was like fighting in the Civil War. After three years at the home, her mental health deteriorated to the point that she was admitted into a Watertown insane asylum in March of 1914. The actual document leading to her committal included "no memory, noisy at times, poor sleeper, and feeble" as the reasons. At the asylum, the rules weren't as flexible as at the home and she was forced to put away her masculine attire and conform to the dress of the day for women. It was the first time in her adult life she’d worn a dress.

On October 10, 1915, Jennie passed away. Her G.A.R. comrades buried her in her uniform with full military honors. Her estate that totaled $500 had been turned over to the IL State Bank of Quincy when she had been found legally insane and after funeral expenses, the sum dwindled to $281.86. Several individuals came forward claiming to be heirs; however, none could be validated. To this day, the money remains on the county books.

On Memorial Day 1977, the town erected a new monument to mark her burial site. It reads: Albert D. J. Cashier, Co G, 95 Inf, Civil War, Born Jennie Hodgers in Clogher Head, Ireland, 1843-1915. To this day, each Memorial Day, flowers are placed on her gravesite. In 1995, Jennie's one room house in Saunemin was razed against the wishes of many locals who wanted the historical marker to remain standing to remind everyone of Jennie's incredible story.