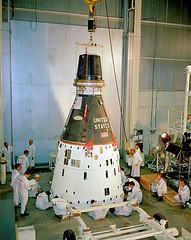 Overshadowed and bookended by the Mercury and Apollo programs, Gemini was instrumental in the success in all subsequent space flights. The objectives of Gemini were several: first, to see how long a crew could stay and work in space; second, to develop methods for rendezvousing and docking vehicles in space; and third, for training astronauts in the rendezvousing and docking procedures.

Gemini 3, the first of the manned Gemini missions, launched on March 23, 1965. Astronauts Gus Grissom and John Young blasted off five days after the Soviets made the first-ever space walk. The capsule for Gemini was a larger version of that used in the Mercury program and capable of sustaining two men for at least two weeks. The rocket used for liftoff was a Titan 2 with two stages.

Gemini 4 launched a few months later on June 3, 1965, with James McDivitt and Edward White onboard. This time it would be the Americans' first venture into EVA (extra vehicular activity) when White left the Gemini capsule for 23 minutes.

Gemini 4 was also the longest American space flight up to that time, lasting just over four days. In August 1965, Gemini 5 would break the record, spending eight days in space. One of the goals of Gemini 5 was to rendezvous with a Rendezvous Evaluation Pod (REP) that it released shortly after achieving orbit. When the Gemini fuel cells began to malfunction, that part of the mission was scrubbed.

Gemini 7 was the next mission, leaving earth on December 4, 1965. Gemini 6 blasted off on December 15. On December 18, Gemini 6, piloted by Wally Schirra and commanded by Thomas Stafford, successfully maneuvered to a rendezvous with Gemini 7 (Frank Borman and James Lovell). The linkup between the two Gemini capsules was the first-ever rendezvous between two space vehicles.

Five more Gemini Missions were launched, all successfully docking with other vehicles. The program ended on November 15, 1966, after proving beyond any reasonable doubt that space crews could spend an extended period of time in space living and working without adverse effects.

More information about the Gemini 5 is available here.