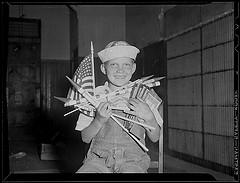 It was the first day of school in September 1946. Jack, and some 1,500 other students at Reynolds High School in Winston-Salem, North Carolina were in attendance for the start of another school year. Jack sat in his freshman English class with 20 other 9th grade students trying to shake out the mental cobwebs that come from being away from school for any period of time, such as a long summer.

While Jack was focused on his studies, as he promised his mother he would be, there were times when his thoughts did turn to other things. And he would occasionally think about the war which had recently ended -- a war which was fought to defeat fascism and imperialism -- a war which was still fresh in the minds of many people including that of young Jack.

Jack's thoughts turned to a young U. S. Marine Private First Class known to his buddies as "Luke."

When the United States entered the war in December 1941, "Luke", the great-grandson of a Confederate soldier, was enrolled at the Edwards Military Academy in Salemburg, North Carolina. His mother had sent him to this military school at the age of 10 after his father had died and he proved more than a handful for her. He was just 13 at the time the war broke out but appeared older than his years.

In the summer of 1942, "Luke" left school with the intention of joining the Marines to fight against the Japanese in the Pacific. He forged his mother's consent on enlistment papers that claimed his age to be 17, and, with his cocky style and mature looks, this 5' 8", 168 pound, 14-year old fast-talked his way past a Marine recruiter in Norfolk, Virginia. And, on August 6, 1942, "Luke" became a United States Marine.

After completing boot camp at Parris Island, he was stationed at Jacksonville Naval Air Station and then was sent to Camp Lejeune, North Carolina. There he was taught to be a machine gunner and was so proficient at it that he was chosen to be an instructor for subsequent classes. But "Luke" wanted to fight in the war, not be an instructor. So, he went AWOL from Camp Lejeune and managed to sneak on board a train with a Marine combat unit heading west. When they arrived in California he answered roll call and admitted his transgression. It didn't make much sense to send him all the way back across the country so "Luke" was assigned to this combat group which then boarded ship for Hawaii and future combat action in the Pacific.

While in Hawaii in the spring of 1943, his age was uncovered. He was threatened with discharge but talked his way out of it -- he was, however, reassigned from the combat unit to the base depot to drive a truck which he did for the next 18 months.

As time went on, "Luke" became more and more frustrated with his assignment -- he wanted to fight the Japanese -- the end of the war was clearly in sight and here he was driving a truck in Hawaii. So, this now 16-year old Marine went AWOL from his base assignment on January 9, 1945 and climbed on board a shuttle boat that was taking Marines returning from liberty back to their ships in the harbor. He climbed up the gangway and onto the deck of the USS Dueul, a troop ship, and became a stowaway. The ship steamed out of port the next day. He did not know where it was heading, but, he knew it was into harm's way and that is where "Luke" wanted to be.

There, as luck would have it, he found that his cousin, also a Marine, was on board. So, he had some friends to cover for him and bring him food and water. On February 8, the 29th day out, so as not to be classified a deserter, "Luke" turned himself in to the authorities on board the ship explaining that he wanted to fight. The Marine battalion commander on board did the only practical thing he could under the circumstances -- he issued "Luke" a rifle and assigned him to "C" Company of the 1st Battalion, 26th Marines with his cousin.

On February 19, 1945, Iwo Jima D-Day, "Luke" eased himself over the side of the ship with his buddies and climbed down the rope ladders into a waiting landing craft. The 26th Marines assaulted the beach for what was to begin 36 days of intense fighting on this volcanic ash covered island.

On the second day ashore, "Luke" and the 3 other Marines in his fire team encountered a squad of 8 Japanese soldiers. During the close-in exchange of gunfire "Luke" shot 3 of the Japanese soldiers and then his rifle jammed. As he looked down to clear his weapon, he saw two hand grenades land amongst his team. Yelling, "Grenades," he leaped on one. He pushed the first grenade down into the volcanic ash under his body and pulled the second one under him to protect his buddies from the impending blasts. As he lay on top of the grenades for that split second before they exploded, he thought, "Luke, you're gonna die." The force of the first grenade exploding blew him up into the air and onto his back. Fortunately, the second one did not explode. Blood poured from his mouth. He thought he was dying. As his buddies went forward to wipe up what remained of the enemy squad, a medical corpsmen came to him and administered morphine and first aid.

"Luke" was evacuated to the hospital ship "Samaritan" where he was declared "too damn young and too damn tough to die." Severely wounded in his right arm, right leg, and chest, he endured 21 reconstructive surgical operations and survived. He was subsequently transferred to the Naval Hospital in Charleston, South Carolina where he completed his convalescence. And there he stayed until his discharge from the service on September 18, 1945.

On October 5, 1945, "Luke", at the age of 17, was awarded the Congressional Medal of Honor by President Harry Truman -- the youngest recipient of that award in the post-Civil War history of our nation.

So, here we have Jack sitting in his 9th grade English class in 1946 thinking about these events. And, perhaps by now you have surmised that the Marine known to his buddies as "Luke", who at the age of 18 went back to complete high school after the war, was Jack...Jack Lucas...once PFC Jacklyn Lucas...the only high school freshman to hold the Medal of Honor.