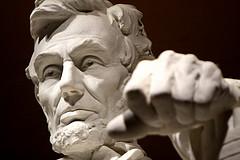 The election of Abraham Lincoln to the presidency in 1860 is commonly viewed as the beginning of a chain of events that erupted into civil war in April 1861. Lincoln was the first member of the Republican Party elected to the presidency, a remarkable rise for a political party that had been in existence less than ten years. At the Republican Convention held in Chicago in 1860, Lincoln received his party’s nomination over several contenders, most notably William H. Seward of New York. Contrary to popular belief, Lincoln was not a backwoods farmer; rather, he was a respected lawyer from Illinois who had gained the national spotlight during his campaign for the United States Senate against Stephen A. Douglas in 1858.

The election of Lincoln was nearly guaranteed by the disintegration of the Democratic Party during its attempts to nominate a candidate. The favorite, Stephen A. Douglas of Illinois, was an anathema to Democrats from the Deep South. So the Democratic Convention adjourned without nominating anyone. Different elements of the Democratic Party then chose their own candidates – John C. Breckinridge of Kentucky, who represented the Deep South Democrats, and Stephen A. Douglas, who represented the Northern and border-state Democrats. The Constitutional Union Party, comprised of former Whigs and other factions, nominated John Bell of Tennessee as its candidate.

Significantly, Lincoln carried all of the free states and none of the slave states. He was elected with just over a third of the popular vote, but an overwhelming victory in the Electoral College (180 to 123 for the other three candidates combined). When the election results were announced, the people of Charleston, South Carolina, began meeting and talking of succession. On November 10th, the legislature agreed to meet on December 17th to consider the question of secession. On December 20th, 1860, South Carolina dissolved the Union when its legislature voted to secede.