The Duchy of Burgundy, Medieval Powerhouse 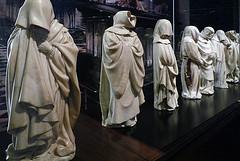 During the fourteenth century the French State was not cohesive and united. The existence of pseudo independent principalities such as Orleans, Bourbon and Brittany, which were led by great princes, created conflict and instability. The most powerful of these principalities was the duchy of Burgundy located between France and the German Empire.

In 1363, King John II of France granted his son Philip the Bold the duchy of Burgundy; this transaction marked the beginning of Burgundy's zenith of power. Philip married Margaret the heiress to the lands of Flanders in 1369. When Margaret's father died in 1384, Philip inherited the rich Low Countries and integrated them into Burgundy creating a Continental powerhouse.

The duchy expanded its influence under Philip the Bold's grandson, Philip the Good (1396 - 1467). Through a succession of financial dealings and armed conflicts the areas of Namur, Hainaut, Brabent and Holland were added to the duchy. Philip also developed the most extravagant court life in Medieval Europe during this time.

Overtime the dukes of Burgundy became detached from the rulers of France. In 1420 Philip made a treaty with Henry V of England (the Treaty of Troyes) which recognized Henry as heir to the French throne. He also allied himself with Henry VI. In 1435 he switched allegiances back to Charles VII of France.

In 1477, the Burgundian army was destroyed at the battle of Nancy. Charles the Bold (Philip's son), the current duke, was killed and the lands of Burgundy were divided between France and Habsburgs. The independent, powerful and influential duchy was no more.