The Development of Union Strategy 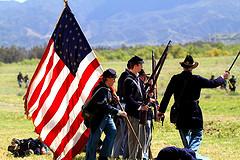 When the South seceeded, Lincoln was faced with the prospect of fighting an offensive war in order to force the Confederacy back into the Union. This meant that he had to recruit more troops than the South in order to have superior numbers for invasion. In other words, he had to recruit, organize, train, feed, clothe, and arm about 3 to 4 men for every soldier the South mustered, roughly 1.5 to 2.5 million men – a daunting task for a country who only had a regular army of about 16,000 men at the time the war began! This situation was compounded by the fact that in order to win, the North had to mass enough men and resources to invade and conquer a territory that was almost the size of Western Europe.

Secondly, from a political standpoint, Lincoln also had the daunting task of holding the Union together, in spite of all of the divisive forces prevalent at the time. He had to walk a proverbial tightrope between the Republicans and the Democrats, the abolitionists and the slavery proponents, and the Unionists and the secessionists. He also had to effectively manage the border states to prevent them from seceding from the Union, a task that required an iron fist as well as kid gloves, depending upon the state involved.

Finally, Lincoln also had to worry about keeping other countries, such as England and France, out of the conflict, while he sought a strategy that achieved his aim of reuniting all states under one government. Lincoln felt that the Union would have to maintain the loyalty of the border states largely for political reasons. He believed that, because nearly half of the voters in the North were Democrats who supported a war to preserve the Union but not a war against slavery, he would have to tread lightly on the slave issue or lose their overall support.

Furthermore, since the border states had a large contingent of pro-confederate sympathizers, he felt that any quick action to support the anti-slave issue would result in at least three of the four border states seceding from the Union. Of the four border states, Delaware was probably the easiest to keep in the Union because of its location and isolation from other Southern states as well as its lack of pro-Confederacy leanings. In terms of maintaining the four border states within the Union, Kentucky represented the greatest challenge for Lincoln, due to its political makeup as well as its constituency. Lincoln handled Kentucky with “kid gloves” because it had a secessionist governor and a Unionist legislature and was trying to walk a very thin line between secession and neutrality.

As a result, Lincoln, along with Jefferson Davis, for that matter, wanted to respect its neutrality, at least for the time-being. He didn’t want to take any anti-slavery action, which might jeopardize the situation and cause Kentucky to revoke its neutrality and secede from the Union. In addition, Kentucky, like Missouri and Maryland, had many confederate sympathizers that Lincoln did not want to provoke. Lincoln was successful in securing the border states, preventing them from seceding from the Union, and demonstrating a knack for handling each situation in just the right way. In addition to securing these border states for the North, Lincoln was also able to secure the western counties of Virginia for the Union which he was only too happy to admit as the new state of West Virginia. This had the effect of insuring that the Ohio River would not become the Northern border of the Confederacy, which would have complicated an invasion of the South. It also kept that region's troops and supplies out of the hands of the Confederates, preventing their use against the Union.

Additionally, it weakened the Western portion of the Confederacy by removing Missouri from the mix and maintaining a delicate strategic advantage in the East. Maryland and Delaware were also kept out of the Confederacy so as not to isolate Washington from the rest of the Union, a situation that would have been strategically untenable. From a geographic standpoint, there were essentially four avenues for strategic penetration of the South by the North, not counting an invasion by sea. In the east, the mountain valleys at the eastern fringe of the Alleghanies allowed the penetration of Virginia from Pennsylvania. Also in the East, the Shenandoah Valley allowed for the penetration of Virginia and the ability to threaten Richmond from the Maryland/Washington area.

In the West, within the mountain district, the route through Chattanooga, Tennessee gave the North the opportunity of transferring troops into the heart of Georgia or to make flanking movements into Virginia. Also in the west, the entire length of the Mississippi River offered the North many opportunities for strategic penetration. Logistically, the North had many more miles of railroads and telegraph lines, which would allow Union troops to move with greater ease and communicate more effectively between armies and theaters of command. In addition, they had a larger Navy and greater number of commercial and private vessels that could be used to ferry troops along major internal waterways as well as to control the high seas or to effect an invasion anywhere along the eastern seaboard of the Confederacy. As a result of their manufacturing and agricultural capabilities, the North could readily feed, clothe, and arm its troops in ways the South could only dream about.

Based on this strategic environment, General Winfield Scott developed an initial plan which consisted of three steps: 1) the blockade of the Southern seaports; 2) the control of the Mississippi River; and 3) the capture of Richmond, Virginia, the capital of the Confederacy. The first step, the blockade of the Southern seaports, was intended to prevent the South from exporting its primary crop, cotton, to Europe in exchange for supplies and weapons to support their war effort. The second step, the control of the Mississippi River, was an attempt to split the Confederacy in half by isolating the western states of Texas, Louisiana, and Arkansas from the eastern section of the Confederacy, preventing them from providing troops to aid Richmond. Finally, the third element of the plan was to ultimately capture Richmond and, essentially cut the head off the serpent. Scott’s plan drew mixed reviews. Lincoln initially thought the plan had merit but many in his cabinet disagreed. By adopting the plan, many thought that Lincoln would come under diplomatic and political scrutiny. By blockading the Southern ports, they felt that Lincoln was recognizing the sovereignty of the Confederacy, something that he had been trying to avoid by virtue of his declarations that the Union was merely trying to bring his national house in order by suppressing a rebellion.

In addition, Lincoln’s Secretary of the Navy, Gideon Welles, was concerned that Scott’s plan would only offend other nations. He felt that those foreign nations who attempted to trade with the confederacy would become enraged at the possibility of having their ships and cargoes seized, fomenting war or, at the very least, infuriating them to the extent that they extended diplomatic relations with the Confederacy. Scott’s plan was also lambasted by the Northern press. General McClellan’s remark about it being a “boa-constrictor” plan, in reference to its goal of surrounding the Confederacy and isolating it from the outside world while squeezing it like a vise, had leaked to the press. They wasted no time in re-naming it the “Anaconda Plan,” where they ridiculed it as an attempt “to squeeze the South to military death.”

Although the "Anaconda" plan was not adopted in its entirety, at the time Scott proposed it, a very similar plan was eventually developed by Lincoln and implemented by Grant. The blockade of the entire Confederate coast was the first part of the plan implemented. Next, Grant was able to control the Mississippi River, with a combination of Union land and naval forces, capturing Vicksburg in 1863, along with other cities of strategic importance such as Memphis and New Orleans, and then begin a military thrust eastward. In a move that wasn’t part of the original strategy, Sherman began his famous march to the sea from Chattanooga in August 1864 dispatching Johnston’s and Hood’s forces on his way through Georgia, ultimately capturing Atlanta, further cutting the South in half, on his way to the Carolinas.

Although the capture, and ultimate capitulation, of Richmond was actually never achieved, it was really incidental to the success of Union strategy as a whole because it really did nothing to defeat the Confederate armies in the field – one of Lincoln’s primary goals. Finally, Grant’s forces used the eastern mountain passes and the Shenandoah Valley during the Petersburg campaign, defeating Lee’s army and leading to Lee’s evacuation of Richmond and his eventual surrender at Appomattox on April 9, 1865.