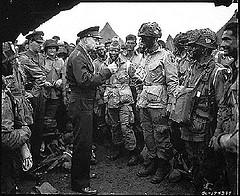 According to the United States National Archives and Records Administration "The Second World War was documented on a huge scale by thousands of photographers and artists who created millions of pictures." One of the most recognized photos of World War II depicts General Dwight Eisenhower talking with men of the 101st Airborne division on June 5, 1944 the day before the invasion of Normandy. Previously, Eisenhower had been briefed by Air Marshal Leigh-Mallory that the 101st was one of two units that would suffer 80% casualties during the invasion.


Gen. Dwight D. Eisenhower gives the order of the Day. "Full victory-nothing else" to paratroopers in England, just before they board their airplanes to participate in the first assault in the invasion of the continent of Europe. June 6, 1944. Moore. (Army)

Eisenhower decided to visit the division in Newbury and talk with the soldiers. Even though his group arrived unannounced and the stars on his automobile had been covered word quickly spread of his presence. Eisenhower walked amoung the men asking their names and where they lived. At some point a photo was taken that captured the humanity of the general and the crushing importance of the moment.

While the 101st did not suffer the predicted amount of casualties during the Normandy invasion, according to the Army and Navy Register, by the end of the war the total casualties for the 101st was over 7,500 men or almost 90% of the authorized strength of the division.

As far as the other subjects in the photo, according to the US Army Web site: "Some of the men with Gen Eisenhower are presumed to be: Pfc William Boyle, _______, Cpl Hans Sannes, Pfc Ralph Pombano, Pfc SW Jackson, _______; Sgt Delbert Williams, Cpl William E Hayes, Pfc Henry Fuller, Pfc Michael Babich and Pfc W William Noll. All are members of Co E, 502d. The other men shown on the photo are not identified."

A finally note of interest is that the photographer is only identified as Moore. The photographer could be 1st Lt. John D. Moore of the Signal Corps.