Book Review: Faith in God and Generals An Anthology of Faith, Hope, and Love in the American Civil War 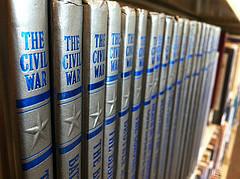 Faith in Gods & Generals, the companion book to the film Gods & Generals, is a riveting compilation of Civil War letters, diary entries, images and observations that serves to bridge the gap to our understanding of the brilliant leaders of the Civil War who are portrayed in the film. If it is tactical or strategic data you're looking for—you won't find it here. It is clear that Baehr and Wales want us to have a prior intimate understanding of the main characters so that we may better appreciate them in the film. But the book is not limited to these larger than life heroes; there are chapters dedicated to women of the war as well as lesser-known historical figures who make an appearance in the film.

The beginning chapters are dedicated to heroes like Stonewall Jackson, Robert E. Lee, and Abraham Lincoln and cover the early personal tragedies that afflicted the life of each—tragedies that seemed to have played a significant role in guiding each man to an unwavering faith in God. Stonewall Jackson, whose early life was filled with great sorrow due to the death of a father, sister, and mother prior to his sixth birthday, is compassionately chronicled. You will find personal revelations on his faith in God and how it provided encouragement to him throughout the days of his life—and comfort on his deathbed. Robert E. Lee, another who was not sparred from early heartache, suffered many losses that only seemed to solidify his faith and lead him to become the most humble, beloved general and greatest military leader of all time. And although he was most noted for those contributions, perhaps his Divine providence was his ability to lead his fellow countrymen in forgiveness and healing after the war. Abraham Lincoln suffered no lesser woes. He was but nine years old when his mother offered him these words from her deathbed, "Abe, I'm going to leave you now and I shall not return. I want you to be kind to your father and live as I have taught you. Love our heavenly Father and keep His commandments." He held her parting words dear and they soon became the foundation for most tasks he undertook, so much so that when he was a lawyer, he earned the moniker "the most honest lawyer east of China." He knew bible by heart and often quoted it during legal proceedings and later in political speeches. But ironically, Lincoln was never baptized and was the only president to never join a church. Although both North and South felt God was on their side, Lincoln summed up his religious beliefs on the war with, "God can not be for and against the same thing at the same time."

What a blessed compilation of intimate details—especially the section on Joshua Lawrence Chamberlain. Through this masterfully written works, we now have the tools to draw our own conclusions on these men. To read their innermost thoughts, whether penned in a letter home to a loved one or said aloud in prayer, this book offers us glimpses into their hearts. We cannot forget about those left behind at home—and Faith in Gods & Generals has addressed their suffering and contributions as well. There is a beautiful story included about a family's treasured quilt that had been handed down through generations. Swatches from wedding gowns over the years comprised the quilt. When a Civil War hospital was petitioning for blankets and quilts, the family heirloom was given without pause in order to bring comfort and warmth to the suffering. This heirloom served a far greater purpose than its creators ever intended. The ending to this story (which I will purposely withhold) is remarkable and epitomizes the grand Force at work. The material is fresh and it is obvious much research went into the project. Having read Faith in Gods & Generals, I know with certainty that when I watch the film, I will do so with a much better understanding and appreciation of these figures whose unwavering faith allowed them to repeatedly beat the odds and triumph both personally and professionally. This is one book you will most assuredly want to read before seeing the movie.