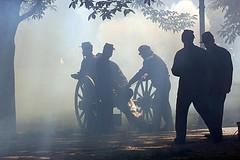 Was at the taking of Forts Hatteras and Clark, was present at and took part in the engagement between the Monitor and Merrimac. Left the Minnesota Sept. 25, 1862 on sick leave . Was promoted to 2nd Asst Engineer, December 17, 1862 and ordered the same month to U. S. Sloop Lackawanna ( off New York), reported Jan. 9, 1863. Went in her to the Gulf of Mexico, joined the West Gulf Squadron. Made a trip to New York on the prize steamer Planter. From June 15 to September 6/1863 remained on the Blockade off Mobile and Galveston until the passage of the forts at the entrance of Mobile Bay by Admiral Farragut Aug. 5, 1864. Took part in this engagement and in the destruction of Fort Morgan. Soon after August 30, 1864 was again sent home on sick leave.

Was ordered to U. S. Steamship Pontoosa at New York DEC. 6, 1864 and joined the fleet of Fort Fisher December 24, 1864 Was present at both the fights at Fort Fisher under Vice Admiral Porter and assisted in the in the reduction of the various batteries on the Cape Fear River below Wilmington. Went afterwards up the James River to City Point and remained until Petersburgh and Richmond fell and General Lee surrendered. Came into Boston in June "65 and went on leave soon after July 3/1865. Promoted to 1st Assistant Engineer DEC. 1/64. Promoted to Chief Engineer From June 6, 1873. From Hammessly's Records of Living Officers of the U. S. Navy; 4th edition, 1890