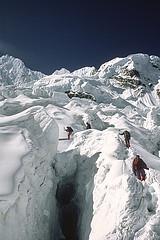 Those famous words were spoken by British climber George Mallory in 1924 when he was asked why he wanted to climb Mount Everest. In August of that year Mallory and his partner Andrew Irvine disappeared on the way to the summit. The large scope of public grief over their demise marked the beginning of Everest's allure and fascination. On May 16, 2002, 54 climbers successfully reached the top of the mountain, a new single day record. Does this record mark the beginning of the end of Everest's mystique and attraction?

Mount Everest is named after Sir George Everest the British Surveyor-General of India from 1830 to 1843. In 1852, Everest's successor Andrew Waugh declared that Peak XV was probably the highest point on Earth (he computed an elevation of 29,002 feet which is very close to the current elevation estimation of 29,035 feet.) Peak XV was renamed Mount Everest in 1865.

The 1953 expedition, led by Colonel John Hunt, was sponsored by the Royal Geographical Society and the Joint Himalayan Committee of the Alpine Club. It consisted of eleven climbers (including Tenzing) and numerous Sherpas (Sherpa is defined as a member of Tibetan people living in northern Nepal). Climbers Charles Evans and Tom Bourdillon almost became the first men to climb Everest. On May 26, during the expedition's first summit attempt, Evans and Bourdillon climbed to 28,750 feet -- less than 300 feet from the top. Unfortunately, strong winds and faulty oxygen gear forced the two men to turn back. Three days later history was made.

Today, it's getting a lot more crowded on Mount Everest. From 1953 through the 2001 climbing season, 1,493 people have reached the summit of Everest. While this may not seem like a large number, a closer look reveals a startling trend.

In addition, these numbers must be mapped onto the short Everest climbing season which is generally a few weeks in May. The conclusion: it's getting crowded at the top of the world.

While climbing Everest is still an incredible and dangerous feat (60 people died trying to climb the mountain in the 1990s) the mystique of conquering the highest point on Earth is certainly waning. At the moment, the only throttle on the number of climbers appears to be the short climbing season. According to Reuters, Edmund Hillary himself is not pleased with the crowds: "I personally, if I were a younger man, would not wish to be on an expedition with so many people around. Climbing Everest now is no longer the big challenge it was, but just a walkway with ladders and fixed ropes all along the route ..."