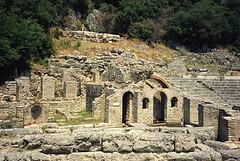 The strange battle of Actium ended decades of Roman civil war and resulted in the rise of the first Roman Emperor. Antony's seemingly irrational battle tactics destroyed him, his armies and his famed wife, Cleopatra. Conjecture over Antony's reasons for abandoning the battle and chasing Cleopatra's ship has been fodder for historians, poets and movie writers for centuries.

After the assassination of Julius Caesar in 44 BC Rome had no clear leader. Mark Antony (Marcus Antonius) took over Caesar's papers and many of his legions but Gaius Julius Caesar Octavianus was named as heir in Caesar's will. (Octavianus also possessed the ever important name "Caesar".) Since neither of the two men could manage a clear majority of support, they formed the Second Triumvirate with Marcus Aemilus Lepidus. Lepidus was a well respected yet aged General.

Individually, Octavianus and Antony continued to persuade senators and generals to join their side. Eventually, Lepidus who had been assigned an unimportant role in Africa, attempted to seize Sicily by force. His troops mutinied and he was forcibly retired by Octavianus. This left Octavianus with control of the Western provinces and Antony with control of those in the East. Antony married Octavianus' sister, Octavia, and an uneasy truce began.

Mark Antony and Cleopatra VII began their fateful relationship after he took over the Western provinces. He began to live openly with Cleopatra and eventually married her although he didn't immediately divorce Octavia his Roman wife. This was greatly resented by the Romans and helped erode much of Antony's support with the public and the Senate. Octavianus capitalized on the situation by reading a supposed copy of Antony's will which gave much of his control to Cleopatra's children Regardless of the authenticity of the will, the propaganda worked and the Senate declared war on Cleopatra (and, therefore on Antony as well.)

Prior to the battle of Actium, Mark Antony took his and Cleopatra's fleet into the Gulf of Ambracia (located on the west coast of Greece). He used towers on land and a row of ships in the water to guard the entrance to the Gulf. Octavianus setup camp on the Northernmost shore of the Gulf across from the Actium promontory (from which the battle gets it's name.) Over the next few months the two commanders were stalemated. A few battles were fought up and down the coast - the most decisive of which by Agrippa (one of Octavianus' Generals) cutoff Antony's lines of communication further down the coast.

During this time disunity increased between Antony, his generals and his wife. Antony's generals didn't trust either Cleopatra or her armies. They also realized that as long as she was present she would act as fuel for Octavianus' propaganda. They argued that if Cleopatra would go home many of the Roman senate, the Roman people and the Roman army would quit their support of Octavianus. In addition, the Roman generals were much more comfortable and experienced with land battles while Cleopatra insisted that Antony had the advantage on the water and should attack by sea. Furthermore she apparently didn't trust her control over Antony unless she was present and thus refused to leave.

Mark Antony finally agreed to take Cleopatra's advice and fight the naval battle and to simultaneously take his General's advice and send Cleopatra home. Exactly when Cleopatra and her ships (which made up a large number of the fleet) were to leave and whether or not Antony planned to go with them is a matter of debate to this day.

On 2 September 31 BC. Antony moved out to meet Octavianus. Antony's fleet consisted primarily of massive quinqueremes with bronze plates while Octavianus' fleet was made up mainly of smaller Liburnian vessels. The quinqueremes had the advantage of height from which to shoot or attack from and the advantage of the plates which protected them from ramming. The Liburnian ships were much more maneuverable. At the time the primary nature of Roman naval battles was to maneuver into position to ram the opponent and thus sink their ship. Since the quinqueremes couldn't maneuver quick enough to ram the faster Liburnian ships and the Liburnians couldn't do much damage even if they did ram the plated quinqueremes the battle progressed more as a land battle than a standard sea battle.

Antony's ships rowed out in two wings where Octavianus' ships were gathered at the entrance to the Gulf. Antony tried to flank Octavianus' right but the sudden move threw his own center into confusion. When Octavianus' center took advantage of the confusion the fighting grew heavy. All day the unusual battle progressed with the land tactics of arrows and spears being fired back and forth without much chance of tangible gain. Late in the afternoon, Cleopatra and her squadron of 60 ships suddenly raised their sails and raced away from the center of the battle to the open ocean.

Antony's reaction has baffled historians for ages. When he saw Cleopatra leaving, Antony immediately left his command ship and followed her with 40 of his own ships following. Some have attributed Antony's rash departure to being caught off guard when his lover decided to leave him. Others have argued that Antony and Cleopatra had always secretly planned for him to steal away with her once her ships had the opportunity to break free. What is certain is that a quarter of Antony's fleet left without warning in the middle of the battle leaving the remainder of his fleet to their doom. By the end of the day the Antonian forces had lost 5000 lives and 300 ships. Octavianus no longer had an enemy capable of contending with him on the sea. A week later when all hope of Antony's return was lost, Antony's land forces surrendered as well.

A year later, as Octavianus' troops closed in on him, Antony committed suicide. Cleopatra was captured by Octavianus but rather than face the certain humiliation of being paraded through the streets of Rome she had a servant smuggle an asp into her quarters and committed suicide. In less than three years after the battle, Octavianus, now called Augustus Caesar, declared himself emperor.

"The Life and Times of Cleopatra" by Arthur Weigall, G.P. Putnam's Sons 1924